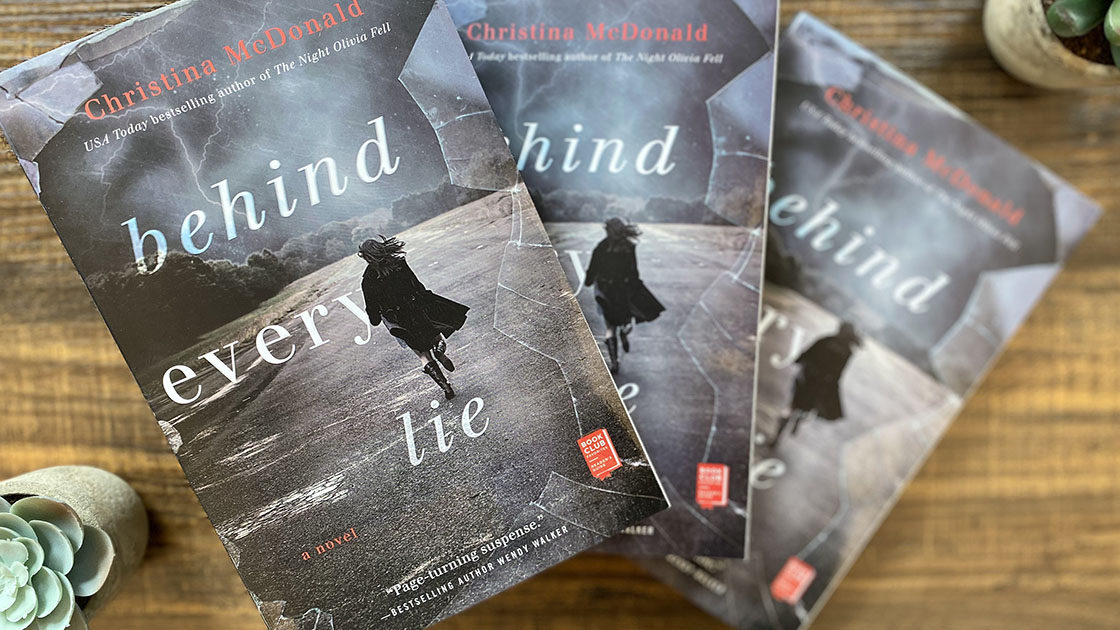 Behind Every Lie is a pulse-pounding thriller, but it’s also a fascinating story about the complicated nature of mother-daughter relationships. The novel centers on Eva Hansen, whose world is turned upside down when she awakens in a hospital room to learn that she was struck by lightning and that her mother, Kat, has been murdered. Since Eva is suffering memory loss and can’t convince the police she’s innocent of the crime, she embarks on a quest to learn who killed her mother. She finds much more than she expected, however, including secrets her mother kept for years.

In the essay below, author Christina McDonald reflects on the way her own views of her mother have changed over time, something many of us will find highly relatable. Read on for a deeper understanding of the inspiration for Behind Every Lie.

Mother-daughter relationships are the most complex and powerful ones out there. When you’re a child you adore her, when you’re a teenager you deplore her, when you’re in college you ignore her, then you grow up and have children of your own, and suddenly she’s your best friend. That is, until she says something critical of you that blows the conversation to pieces. The smallest comment, or lack of one, can wound you with its shrapnel.

So when I was 19 and returned home to visit my mom, only to find all the walls completely bare of my childhood pictures, it was a hard lesson that the most important relationships are often the most complicated, with the potential to cause the most heartache. All I saw when I looked at those bare walls was an entire shared history suddenly scrubbed out. It took me a long time to untangle some of the knots behind why she did it.

For as long as I can remember, my mother and I had a complicated relationship. There were eye rolls, tears, hugs, shouts, silences, power struggles, and heartfelt declarations of love. Seemingly daily, I ricocheted between extreme anger and extreme love. These emotions were powerful and confusing and wondrous and incredible, full of highs and lows pulling us in opposite directions: my need to develop autonomy and her need to keep me close.

It turns out there’s scientific evidence to back up the strength of these emotions. According to the Journal of Neuroscience, our relationships with our mothers are deeper, with stronger emotions, both positive and negative, than fathers have with sons. Personally, I think this is because words bond mothers and daughters together more intimately than other relationships do.

In You’re Wearing That? Understanding Mothers and Daughters in Conversation, Deborah Tannen says: “Women are healed by, or ache for, satisfying conversations with their mothers and adult daughters; in some cases, to build on already excellent relationships, in others to break out of cycles of misunderstanding that can turn amiable conversations into painful or angry ones in the blink of an eye. Both want to maximize the gifts of rapport and closeness while minimizing the inevitable hurts that come along with any close relationship but can be especially intense in this one.”

From early childhood, mothers and daughters tend to be close, with much of their identity and self-worth wrapped around each other. As the daughter gets older, moving into the teenage years and then adulthood, both mothers and daughters may struggle with the daughter developing her own, separate identity. Some mothers experience this as rejection, which drives daughters to pull even further away in an effort to not hurt their mother and to avoid feeling like she herself is being criticized.

It’s a cycle as old as time.

My parents divorced when I was an adolescent, so this cycle was particularly challenging for us. Compounding the issue, my mom’s mother died when my mom was an adolescent, so when she herself became a mom—and after her divorce—she was a single mother raising three young girls alone without the benefit of a role model to look up to. She couldn’t work because she had three small children to look after, and she couldn’t afford day care. My sisters and I were all that she had, and she was all that we had.

My mom was a mom—that was her identity. She’d spent years being a mother who knew what was best for me, but suddenly I became my own person, an individual, and I didn’t need, or want, her telling me what to do. And that threatened her identity as a “good” mom. For my part, I was just beginning to need more privacy, locking myself in my room and keeping things to myself, a necessary but difficult part of growing up and away from my mother.

For mothers and daughters, the process of separating can be an incredibly painful one. Mothers need to give daughters just the right amount of space so they can attach in a new way, while letting their daughters know they still have their back. And daughters need to learn to fully separate in order to gain a healthy perspective, and to recognize that sometimes what appears to be criticism might actually be concern.

It’s a difficult line to balance, but only in this separation can daughters find a new self-esteem apart from their mothers. Once they’ve established themselves as separate individuals, they can find the space to reattach to each other. Being a mother is a series of steps in letting go, and being a daughter is a lesson in leaving and learning to find your way back home.

Years later, when I thought about those empty living room walls, I realized my mom was instigating the necessary individuation that mothers and daughters should have, as well as protecting herself from the pain she knew would come. Maybe she did it in a clumsy, roundabout way, but now that I see why she did it, I understand her better.

Looking back now with two children of my own, I see my mom as a selfless superhero, even if she’s not a perfect human. But that didn’t happen overnight. I grew up, I went to university, I moved away. There were huge tracts of time during which we didn’t speak. But I always found my way back to her because deep inside of me I knew that no matter what mistakes she’d made, she loved me as truly and instinctively as the air she breathed.

These days I look at my mom and I think I’m incredibly blessed, and I couldn’t be more grateful. Because I’m a mother, but I’m also a daughter. I am both. Like ripples that widen across the water, separate but gradually becoming one. And when I visit my mom, she might not have those pictures of my sisters and me up on the wall anymore, but she has pictures of my children up there. And for me, that’s enough.