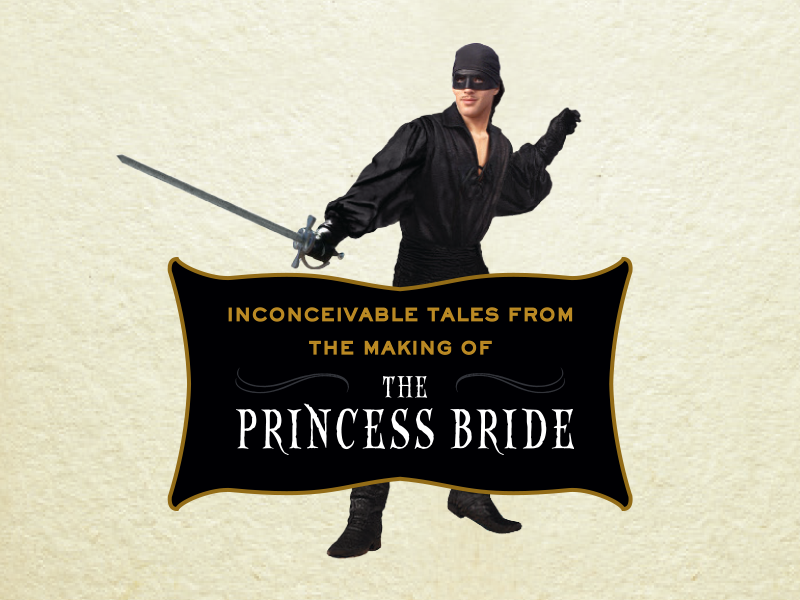 Confession: I’ve been known to cancel my plans for the evening if I’m flipping through the channels and happen to stumble upon The Princess Bride, one of the most beloved movies of my childhood, the 80s, and basically of all time. If you can’t find The Princess Bride on cable, the next best thing is reading As You Wish: Inconceivable Tales from the Making of the Princess Bride by Cary Elwes, who played the dashing, debonair, and still eminently swoon-worthy Westley.

The book is packed with sweet stories and little-known details from the filming of the movie, along with sidebars from his costars (like House of Cards‘ Robin Wright, Billy Crystal, Wallace Shawn, and more), the crew, and even the author of the book the film is based on, William Golding.

Here are just 9 funny, surprising, and (why not) inconceivable things you’ll learn when you read As You Wish (which, by the way, is coming out in paperback October 4th!

Get your copy: Amazon/Barnes & Noble/IndieBound

1. The producers of The Princess Bride almost didn’t meet Cary Elwes, who would play the iconic leading man, Westley.

When Rob Reiner, the movie’s director, and Andy Scheinman, Reiner’s producing partner, decided that they wanted to see Elwes for the role, he was in East Germany shooting an independent film—and the Chernobyl disaster had occurred just months earlier.

“I’m looking at maps, and they have gray areas where the nuclear fallout is, and I don’t like it. And Rob was like, ‘Don’t go if you din’t want to.’ ” But Reiner and Scheinman went and ended up offering Cary the part after hearing him read just a half page of dialogue.

2. Robin Wright was an unlikely find to play Princess Buttercup.

Reiner and Scheinman saw hundreds of young, up and coming actresses for the role of Buttercup, but never considered Wright because she isn’t British. It turned out that she grew up watching Monty Python with her father and her accent was spot on. She had to temporarily leave the soap opera she was on (Santa Barbara) to film the movie, and her bosses on the TV show tacked an extra year on to her contract in exchange for the time off.

3. Andre the Giant was incredibly insecure about his ability to speak English fluently for his role of Fezzik.

Reiner and Scheinman acted out every page of Andre’s dialogue and recorded it on tape so that Andre could memorize it. Throughout the filming of the movie, Andre paced back and forth with headphones on, listening and studying his lines.

4. One of the movie’s most famous lines, “My name is Inigo Montoya. You killed my father; prepare to die,” became incredibly personal for actor Mandy Patinkin.

Patinkin had lost his own father 14 years before The Princess Bride was filmed, but says that he read the script and thought, “If I can get that six-fingered man, then I’ll have my father back, in my imaginary world. He’ll be alive in my imagination.”

5. The training that Elwes and Patinkin did for the now canon sword fight scene was indeed epic.

Before filming began, Elwes and Patinkin trained for 8-10 hours a day for two and a half weeks with legendary stuntman Peter Diamond and Olympic fencer Bob Anderson. (Unbeknownst to Elwes, Patinkin had started even earlier with lessons two months prior.) As the movie was being filmed, Elwes and Patinkin spent any free time they had training separately, and the sword fight scene was shot at the very end of the four month shoot to give the actors as much time to prepare as possible. No stunt doubles are used in the scene except when the characters do acrobatics to flip off the bar.

6. The Rodents of Unusual Size (R.O.U.S.) were not created out of CGI magic.

Inside the costumes—50 pounds of latex, fake fur, and rubber—were actors played by little people, the only ones who could fit in the rodent suits. On one of the final days of shooting the Fire Swamp scene, the actor who played the R.O.U.S. was extremely late to set. He had been pulled over for speeding the night before and taken to jail when the arresting officer thought he was drunk because he said he was actually an actor in a movie playing a giant rat.

7. Florin Castle has appeared in many other Hollywood blockbusters.

Haddon Hall, located in England’s Peak District, has been owned by the same family since 1597, and has been featured in three versions of Jane Eyre, Pride and Prejudice, Elizabeth, and Lady Jane (which Elwes also starred in).

8. Andre the Giant had a creative way of warming up his castmates.

It was chilly when they shot the scenes where Buttercup is kidnapped on the Derbyshire moors, and Wright couldn’t stop shivering. Elwes recalls how “Andre, sweetheart of a man that he was…would use one of his hands as a hat on top of Robin’s head. She said it was like having a giant water bottle up there.”

9. Elwes suffered not one but two major injuries over the course of filming the movie.

Six weeks into filming, Elwes was driving Andre the Giant’s ATV when his foot slipped off the clutch, becoming wedged between the gas pedal and a rock beneath the vehicle. He broke the big toe on his left foot and spends much of the film limping, although camera tricks make it all but impossible to spot in the final cut.

Weeks later, they were filming the scene in which Rugen (played by Christopher Guest) knocks Westley over the head with the butt of a sword. Elwes felt like Guest was holding back, so he encouraged Guest to really go for it to make the scene look more realistic. The result was a little too realistic: Elwes was knocked unconscious and had to have stitches on his head. He writes, “When you see Westley fall to the ground, that’s not acting. That’s an overzealous actor actually losing consciousness.”