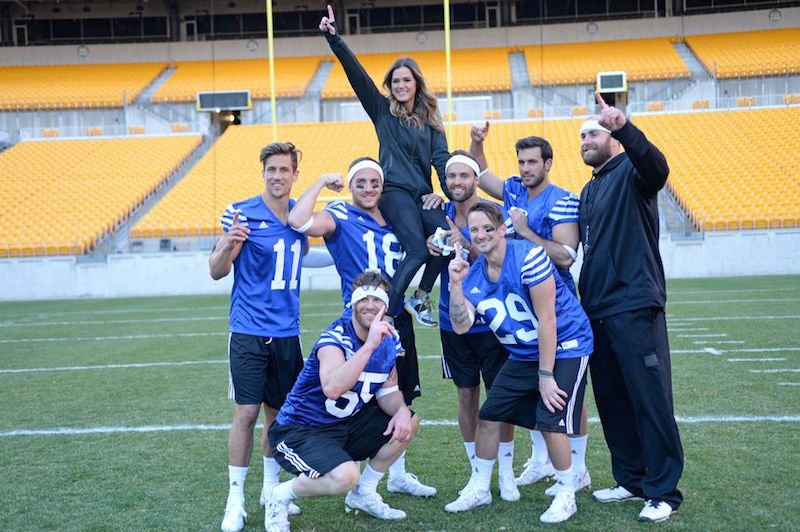 After an unbearable Bachelorette-less Monday night last week, Jojo and the boys are back in action. Granted, the NBA Finals did their best to rival the Bachelorette in drama, but even #mouthguardgate can’t compete with the likes of Chad, Destroyer of Yams. To celebrate the show’s triumphant return, I wanted to take a moment to celebrate my personal favorite thing about the show—the merciless, hilarious tweeters of Bachelor Nation, especially those from our very own literary community.

The overlap between book Twitter and #TheBachelorette never ceases to amaze, but the fact is that there is something about The Bachelor that draws in super smart, well-read women (and the occasional man—you go Kevin and Connor!) Sociologically, the show is a genuinely fascinating (read: horrifying) depiction of the way our culture views love. It’s a phenomenon, a communal experience, and an opportunity to showcase our best snark. Above all else, it’s effing entertaining. These authors, journalists, and book lovers represent the best of what the literary community has to offer to the Bachelorette conversation, and you can bet I’ll be retweeting the crap out of them tonight over @glommable.

Let’s just start at the top. If you are a card-carrying member of Bachelor Nation (in my wallet right next to my Woman Card, duh), your Bachelor night prep goes something like this:

Jennifer Weiner is the OG of Bachelor tweets, and she is nothing if not dedicated to her craft. There are too many highlights to name, but here are a few recent faves.

Chad, shocked that Jojo never threatened to rip the limbs off her competitors and dump their limbless corpses in the pool. #TheBachelorette

Bio: NYT Bestselling Author of The Syrena Legacy Series and adult romance How To Lose A Bachelor. NEMESIS, a YA Fantasy Romance, out October 4!

Anna Banks is relatively new on the Bachelorette tweeting scene, but these gems were more than enough to get her on my short list. Keep the tweets coming girl!

Communication is so subjective. Make out with someone if you can’t read them right away. #TheBachelorette

Luke, simmering in a hot tub. And JoJo or whatever is there too I guess. #TheBachelorette pic.twitter.com/Y3wt1rHIRG

Dana Schwartz is so committed to Bachelor Nation that she recently wrote an Observer piece entitled, “Reasons I, Dana Schwartz, Should Be the Next Bachelorette.” And let me tell you, it was pretty damn compelling (#2: “You’ve definitely never had a kind of mean feminist Bachelorette.” Sold!) Plus Jennifer Weiner tweeted it and God knows the Bachelor producers get text notifications for her Bachelorette tweets, so Dana is well on her way.

Damn Daniel, back at it again with the fascist metaphors #TheBachelorette

As the host of a Bachelor recap podcast, Claire is a certified Bachelor expert—funny, smart, and informed. The best part about Claire Fallon’s Bachelorette tweets this season was the unrestrained realness of her analysis of Chad’s frightening behavior. Thank you Claire for addressing the fact that threatening people’s lives isn’t actually funny….

“hey so, some of the guys are afraid for their lives.”
“send one guy in a security guard jacket?”
“fixed it!” -producers#TheBachelorette

Jenny Mollen is an actress and the New York Times bestselling author of Live Fast Die Hot. But you know her for her Bachelor tweets.

“I don’t get it, I don’t start anything w anybody” -chad, as he pulls a bloody knife out of his pocket & licks the blade #TheBachelorette

Bio: Marketing Director & Senior Editor at @Pegasus_Books. I like books and the people who read them. || iris@pegasusbooks.us

She also likes The Bachelorette and the people who watch it, and those two things combined make her pretty much my soul sister. Iris was a little bit behind this season, but she’s back with a vengeance and has more than earned her spot on this list with essential tweets like these:

Confirmation of the fact that Luke was a football recruit: He thinks West Point—THE SCHOOL HE ATTENDED—was Ivy League. #TheBachelorette

Kevin Nguyen is one of my favorite tweeters in general, so the realization that he watches The Bachelorette was a glorious one.

Chad is the Bachelorette equivalent of Chekhov’s gun

Congrats The Bachelorette. You found the most embarrassing Asian of all time.

Bio: And now it’s a whole thing with Jean. Literary Agent at @FuseLiterary.

The only complaint I have about Connor’s Bachelorette tweets is: I WANT MORE. But really, this one was a no-brainer because Connor and I share an affinity for Ali and his spectacularly sensual (and shockingly under-appreciated) eyebrows.

I appreciate this season of #TheBachelorette opening with a “Ben H.: ultimate fuckboy” montage

Another one of my favorite-in-general tweeters, Margaret does not skimp on the Bachelorette tweets.

“Every Nosebleed a Blessing.” is for sure a thing that #TheBachelorette‘s producers have cross-stitched on a pillow in the green room.

“That is not a suggestion, Rachel, that is a command. Find me a BALD EAGLE or find yourself a new goddamn job.” #TheBachelorette

She does know things you guys, mainly the perfect thing to say in any Bachelorette situation.

This is cringe-worthy. I’m sorry, sports. You don’t deserve this. #TheBachelorette

Chad is the dude you meet at a wedding and have a one night stand with. Before the buffet. #TheBachelorette

BONUS: @Glommable! We’ll be live tweeting up a storm tonight so follow along and chat with me so I don’t feel alone.