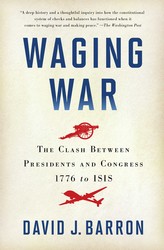 An “ambitious...deep history and a thoughtful inquiry into how the constitutional system of checks and balances has functioned when it comes to waging war and making peace” (The Washington Post)—here is the full, compelling account of this never-ending debate.The Constitution states that it is Congress that declares war, but it is the presidents who have more often taken us to war and decided how to wage it. In Waging War, David J. Barron opens with an account of George Washington and the Continental Congress over Washington’s plan to burn New York City before the British invasion. Congress ordered him not to, and he obeyed. Barron takes us through all the wars that followed: 1812, the Mexican War, the Civil War, the Spanish-American war, World Wars One and Two, Korea, Vietnam, Iraq, and now, most spectacularly, the War on Terror. Congress has criticized George W. Bush for being too aggressive and Barack Obama for not being aggressive enough, but it avoids a vote on the matter. By recounting how our presidents have declared and waged wars, Barron shows that these executives have had to get their way without openly defying Congress. In this “vivid…rich and detailed history” (The New York Times Book Review), Waging War shows us our country’s revered and colorful presidents at their most trying times—Washington, Lincoln, Theodore Roosevelt, Franklin Roosevelt, Truman, Eisenhower, John F. Kennedy, Johnson, both Bushes, and Obama. Their wars have made heroes of some and victims of others, but most have proved adept at getting their way over reluctant or hostile Congresses. Donald Trump will face this challenge immediately—and the Constitution and its fragile system of checks and balances will once again be at the forefront of the national debate. More essential than ever, Waging War is “both timely and timeless” (The Boston Globe).