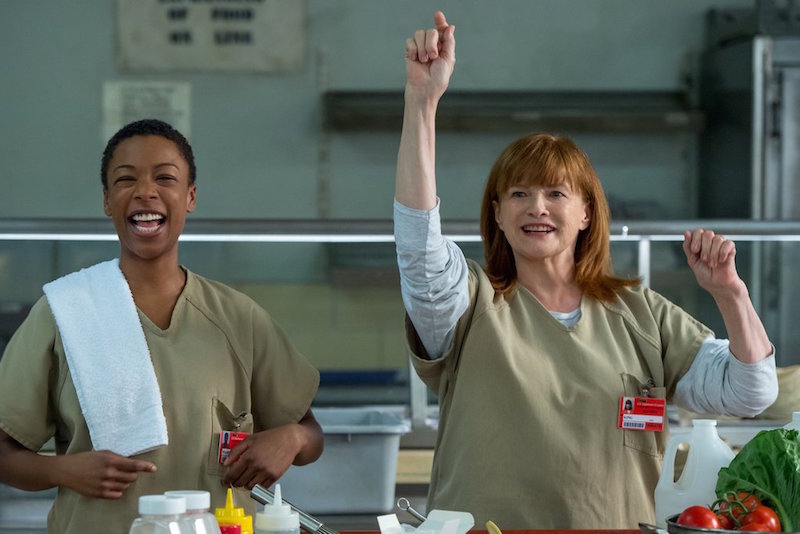 After a nail-bitingly long year’s wait, Netflix’s most-watched series Orange is the New Black returns for its fourth season today. Fans will rejoice, streaming bandwidths will be stretched, and in no less than 13 hours (if you’re an efficient consumer of internet television) it will all be over.

So what to do when that happens?

Perhaps it’s the show’s crime and punishment angle that intrigues you. Maybe it’s the righteous feminism. Maybe you’re just into Orange Is the New Black’s cynical blend of black comedy and poignant gravity that has endeared it among audiences and awards committees around the world. Maybe it’s the actors themselves. Whatever it is, it’s probably also in a few of these books. You know, to keep you busy until next year.

1. SHARDS: A YOUNG VICE COP INVESTIGATES HER DARKEST CASE OF METH ADDICTION—HER OWN  by Allison Moore

From former cop and debut author Allison Moore comes a shocking true story. Moore was a precocious narcotics officer who quickly rose through the ranks of the Maui Police Department. But she nearly saw her life, career, and personal safety come crashing down when she spiraled into a serious meth addiction. Her endangerment came to a head when a ruthless and sadistic drug dealer imprisoned her in his house, with no escape in sight.

Moore recounts an unparalleled personal narrative of fear, deception, desperation, and hopelessness, all while struggling to maintain to her friends and family a lie of happiness and stability that spirals out of control.

2. RANDOM FAMILY: LOVE, DRUGS, TROUBLE, AND COMING OF AGE IN THE BRONX  by Adrian Nicole LeBlanc

It took writer and journalist Adrian Nicole LeBlanc more than 10 years to write her first book, and her patience was well worth it. Random Family is a nonfiction account of two women, their families, and their brushes with drugs, law enforcement, and serving prison time in the Bronx.

LeBlanc spent those years doing immersive reporting, practically living with her subjects, interviewing prostitutes, drug dealers, and petty criminals throughout one of the poorest neighborhoods in New York City. What emerges is an insightful and brutally real look at an “other half” that is commonly plastered across the popular media but remains a vague mystery to most. Through a stylistic brand of narrative reporting that often reads like fiction, Random Family toes the line between documentary and personal statement, objective observer and invested participant.

3. THE STASH PLAN: YOUR 21-DAY GUIDE TO SHED WEIGHT, FEEL GREAT, AND TAKE CHARGE OF YOUR HEALTH by Laura Prepon and Elizabeth Troy

The Stash Plan is a food-science and Eastern holistic medicine-oriented diet and lifestyle guide by Laura Prepon, who plays Alex Vause on Orange Is the New Black and integrative nutritionist Elizabeth Troy. And they know what they are talking about. The Stash Plan emphasizes detoxification of the body through the use of a range of techniques both ancient and cutting edge. The meals are designed to bring out every body’s best qualities and jumpstart the metabolism without breaking the bank.

4. TURNING THE TABLES: FROM HOUSEWIFE TO INMATE AND BACK AGAIN by Teresa Giudice

Wine-drinking, table-flipping Real Housewife of New Jersey Teresa Giudice has done what most reality stars can only dream of. She turned her PR (and actual) nightmare of a prison sentence for tax fraud into a cathartic and sometimes humorous memoir, the first non-cookbook she has published since her rise to fame on Bravo.

Serving one year at Danbury Federal Correctional Institution in Connecticut—the same prison that inspired Litchfield Penitentiary of Orange Is the New Black—Giudice claims she was never handcuffed or behind bars.

But according to what she told People, the drama we see on OITNB isn’t far off: “There is no privacy. The drama in there is crazy.”

5. IN THE COUNTRY WE LOVE: MY FAMILY DIVIDED  by Diane Guerrero

The actress who plays Maritza Ramos on OITNB and Lina on Jane the Virgin was only 14 years old when she returned home one day to find that her entire family, who had obtained American citizenship illegally, had been deported to Colombia without notice. Faced with sudden poverty and potential homelessness, Diane Guerrero was taken in by other Colombian families living around the Jamaica Plain and Roxbury neighborhoods of Boston.

Guerrero’s harrowing story, as the sole American citizen in her immediate family by birth, is documented in her new memoir, In the Country We Love: My Family Divided. In the wake of that traumatic event, she recounts how was able to cultivate a successful acting career without the support of her family.

6. THE EXECUTION OF NOA P. SINGLETON  by Elizabeth L. Silver

This debut novel by Elizabeth L. Shriver takes place six months before the execution of an inmate, Noa P. Singleton, by the government for first degree murder. Noa has barely spoken a word, even throughout her trial. The victim’s heartbroken, remorseful mother pays a visit and offers to ask the governor to convert the death penalty to life in prison—if and only if Noa tells her why she committed her crime in the first place.

What ensues is a heart-wrenching narrative of the inexorable ties of love, guilt, anger, and deception that eventually comes to tie these two women together, even as the date of the execution approaches. Few novels are as original or unpredictable as The Execution of Noa P. Singleton.

7. BORN WITH TEETH by Kate Mulgrew

Actress Kate Mulgrew is known for playing strong women on television, from Star Trek’s Captain Janeway to OITNB’s Galina “Red” Reznikov. In Born with Teeth, she offers an insightful look into the experiences that informed her honest and fearless outlook on life.

Balancing equal turns of irreverence, comedy, and tragedy, Mulgrew spins an unapologetically honest portrayal of herself. The daughter of an Irish-Catholic contractor, Mulgrew always saw an artistic passion in her mother that was deterred by the times and the responsibilities of motherhood. At 18, Mulgrew moved to New York to pursue acting with a promise never to end up the same way. Safe to say, she has never looked back.