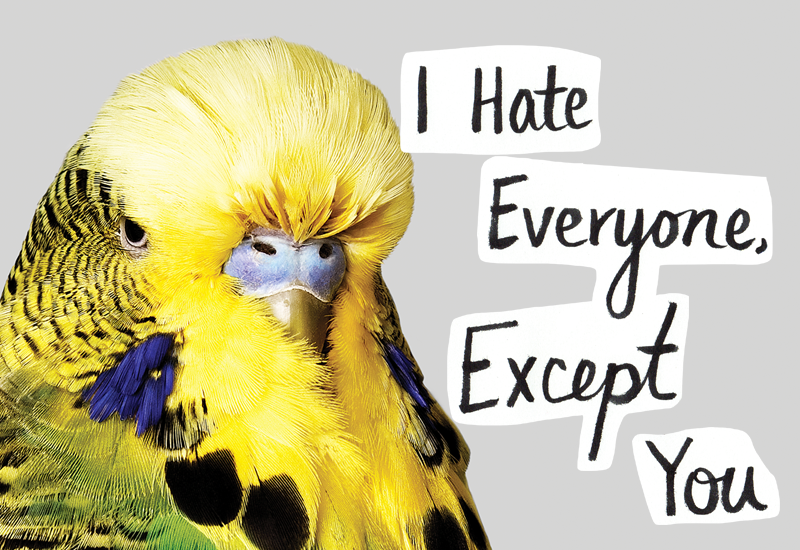 Long Island misfit, reality show host, protective brother, and imaginative writer Clinton Kelly turns his eye to nonfiction in I Hate Everyone, Except You, a book of essays so funny Jane Lynch was “doubled over laughing.”  Whether he’s teaching contest winners how to plate salad, critiquing outfits under duress, or offering encouragement to high school graduates, Clinton’s “perfect blend of heart, humor, and trucker language” (Bookpage) has something for anyone who likes a laugh. This sweet, hilarious excerpt recounts the arrival of Clinton’s baby sister, Courtney.

When Courtney was born, I was thirteen and having a rough time in junior high. By the eighth grade I had neither mastered the social game of adolescence (destroy others lest you be destroyed) nor fully constructed the persona that would eventually allow me to cope with the horrors of high school (that I was a member of the upper-middle class who had somehow found himself, through no fault of his own, living in a squarely middle-class town). Mostly, I was horrified by the way kids my age behaved toward one another. Pushing, shoving, cursing, name-calling. It was all so vulgar.

The way I saw it, Courtney was an innocent soul entrusted into my care, at least when my parents left us home alone to meet friends for dinner. I was determined to construct for my baby sister a future free of humiliation and sadness.

When she was three, I would sit with Courtney for hours flipping through magazines and catalogs playing a game I had invented for her called Pick One. At every spread, she had to choose from the two pages the one she liked better. This task would make her confident and decisive, I told myself. Some choices were easy, like a page of dense women’s-magazine text opposite an advertisement for tampons. “This one,” she’d say, pointing to the tampon ad, because in it a woman smiled ear to ear while riding a bicycle. Tampons are fun! But some decisions were more difficult, like when it came to the Toys“R”Us catalog. On the left, an Easy-Bake Oven; on the right, a Barbie Townhouse.

“You can only pick one page,” I’d say. “You have to make your decision and live with it forever.” The pressure was for her own good.

“The Barbie house.” She looked up at me for signs of approval. I gave her a slight smile as if to say, Whatever you choose is the right choice. But in my heart, I was doing backflips in piles of glitter. Yes! The townhouse! An oven without a house attached? How stupid. And that stove is so old-fashioned. A townhouse would have a modern oven in it, something with a convection setting, plus lots more fun stuff, like a private elevator! And if you played your cards right—kept yourself thin, learned how to toss your hair at cocktail parties—you could probably marry a rich man and hire a servant to do all the cooking for you.

Another favorite game of ours was called Would You Rather, in which one of us would present two death-related scenarios and the other would choose the preferable demise. For example, I might ask my four-year-old sister: “Would you rather die being pecked to death by crows or drowning in a kiddie pool full of puke and orange soda?”

“Orange soda,” she’d answer. “Would you rather get shot in the head or stabbed in the heart?”

Courtney and I also spent a lot of time practicing cheerleading moves in the backyard. “When you jump, keep your elbows bent,” I’d tell her. “I’ll lift you up from there and then you can stand on my shoulders. Got it?” She would nod, her big green eyes unblinking. She looked like one of those paintings in our pediatrician’s office. “And what do you yell when you’re up there?”

“Right!” I had never watched a football game in my life, nor did I intend to. I knew approximately four football-related words. Defense, tackle, touchdown, and . . . ummm . . . ball. So we just rotated through those, Courtney shouting from atop my shoulders: “Get the ball! Yay, a touchdown! Tackle that bastard!” I was going to make sure Courtney became a cheerleader if I had to become a hunchback in the process—because cheerleaders, I was certain at the time, didn’t have a worry in the world.

Occasionally [my mom], Terri, would open the back door to check on us, the corded kitchen phone wedged against her ear. She was going through a phase in which she had to spend every waking moment talking to her friend—and our former housemate— Lynn. Though Terri and Lynn had each remarried, they seemed to be having a difficult time living five miles apart. No subject, however mundane or highly personal, was off-limits between those two, which was most likely the reason my sister Jodi barely left her room between the ages of twelve and sixteen. They were obsessed with their daughters’ pubescent developments.

On any given day in our kitchen you might hear one side of the conversation that went something like this: “I’m making chicken cutlets for dinner. What are you making? . . . Pork is nice, as long as you don’t overcook it. . . . Bra shopping? How did that go? . . . Oh, Candice is a C? Jodi’s still a B-cup, but I’m sure she’ll be a full C by the time she finishes high school. That’s what I was. You know, any bigger and a different kind of man is interested . . .”

And on it went, all day. The backyard was my and Courtney’s only escape from talk of suburban homemaking and fourteen-year-old-girl parts.

“Could you please not kill your sister,” Terri would call out to me.

“I don’t know what he’s doing. He’s got her hair in pigtails and he’s throwing her around the yard.” She shut the door.

By the time I left for college, I felt pretty sure I had aimed Courtney directly toward my—I mean, her—target: unparalleled popularity! How could she not hit the mark? She exuded all the qualities I never possessed in high school: Self-confidence! Joie de vivre! Willpower! A steely poker face when confronted with disappointed authority figures! (If my parents told me they were “disappointed” in me, I would immediately burst into grotesque sobs. But not Courtney. She would look you straight in the eyes like, You think I give a crap about your opinion of me?) Granted, she was only six, but the kid had star quality.

I don’t know too much about Courtney’s high school years because I was in my late twenties by that time, and wholly obsessed with my own love life, career, body, social life, and future. Jodi had moved to Japan after college, and I was living in New York City, so Courtney was basically raised by my parents as an only child. She and I would talk on a regular basis, however, so I knew she was a captain of the cheerleading squad and quite popular.

And while she could be sweet and silly around me, I could recognize in her when she spoke about the social dynamics of high school a certain ruthlessness, and a weariness, as if staying on top of the pile was taking its toll. I was so proud of her and yet I felt profoundly sorry for her. I guess I had forgotten to mention, after moving out and moving past, that I was just kidding. Those games we had played, they were just games.

Life went on, as it tends to, if you’re lucky. Courtney married her high school boyfriend after she graduated from college. Today they have two beautiful sons, the older one named Clinton. I got a little choked up when they announced that decision. We talk all the time about things like our marriages and her kids and our parents and our mutual love of wallpaper. And once in a while she asks her big brother for a favor.