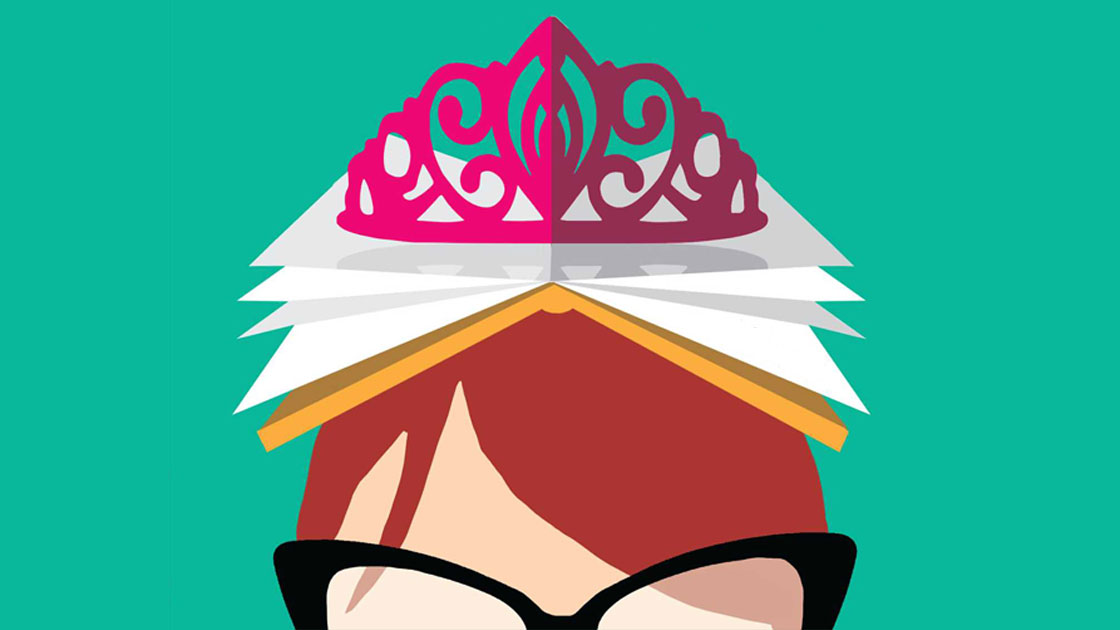 The holidays are upon us once again, and this time of year seems to be filled with cutesy rom-coms. Need a break from staring at the TV screen watching all the new Hallmark/Netflix Christmas rom-coms? Check out Teri Wilson’s The Accidental Beauty Queen!

Charlotte loves her job as an elementary school librarian, and is content to experience the adventures of life through her many books. Her twin sister, Ginny, on the other hand…is an Instagram-famous beauty pageant contestant and is not giving up until the title of Miss American Treasure is hers.

When Ginny drags Charlotte along to the pageant for support, something terrible happens: Ginny gets some sort of horrifying allergic reaction—and Charlotte suddenly finds herself walking across the pageant stage as her twin.

If you love Netflix’s new holiday rom-com The Princess Switch (starring Vanessa Hudgens), you will adore The Accidental Beauty Queen.

Check out an excerpt from the story below!

Ginny and I weren’t always such polar opposites.

There was a time when we were inseparable. We were the sort of identical twins who dressed alike, wore our hair the same way, and completed each other’s sentences. We were twins in the vein of Mary-Kate and Ashley, minus the millions of dollars and a hit television show.

Somewhere in the attic of Dad and Susan’s two-story colonial in Dallas, Texas, there are volumes of photo albums documenting this period of my life.

Our lives, I should say.

There was no me back then, just as there was no Ginny. There was just us. Me and her. The twins.

On the rare occasion, I actually flip through one of those albums, I can never identify myself in any of the pictures. Ginny and I are interchangeable in our matching rompers, matching socks, and matching patent leather shoes. Our haircuts are the same, as are our smiles.

As are our memories.

Was it Ginny who fell off a pony in the kiddie area at the rodeo, or was it me? Which one of us lost a tooth first? Who colored the picture of the house and the smiling family of stick figures that still hangs in a frame above the staircase in our childhood home?

I used to try to sort those early years out, to untangle the web. Then I realized it was hopeless. Being a twin means knowing you’re always part of a bigger whole. We were one once, and now we’ve been split in two.

The day after our fifth birthday, our mom was diagnosed with ovarian cancer. That’s when it all stopped—the matching outfits, the photos, the carefully curated albums. Seven months later, she was gone.

I think that’s when the split became permanent. Our father had enough on his plate raising twin girls on his own while trying to get tenure at the same time. Making sure we were fed and dressed in clean clothes every morning was a victory in itself. Matching outfits and hair ribbons were out of the question. For the first time, people could tell Ginny and me apart. Somewhere deep down, so could we.

Despite all our similarities, my sister and I handled the loss of our mother in completely different ways. I attached myself to our father—our sole remaining parent— morphing into the quintessential daddy’s girl. Other than Ginny, he was all I had left. My love of books is firmly rooted in my childhood and my devotion to my dad, a university English professor.

Ginny loves him too, obviously. She always has. But growing up, she ached for our mom. That’s what all this pageant business is really about. Our beauty queen mother left a big, beauty queen–shaped hole inside Ginny, and she’s been trying to fill it for the past twenty-four years.

I remind myself of this fact when I take up my duties as official pageant dog walker. Buttercup despises me. That much is obvious when she collapses to the ground and tries to writhe out of her collar in order to get away from me the minute the door to our room clicks shut behind us. It’s a full-on spectacle, made all the more humiliating by the fact that it’s taking place in front of a hallway full of glamazons.

Buttercup flips onto her back and paws at the air. For a second, I wonder if she’s having a seizure. But there’s a mischievous glint in her googly eyes that assures me she’s fine. She’s just in the throes of a canine temper tantrum, not a medical emergency.

“Oh my, is your sweet little dog all right?”

I look up. Miss Nevada is teetering toward me on a pair of those mile-high platform stilettos.

More beauty queen interaction is so not what I need right now. I let out a strangled laugh. “She’s fine. She’s just a little shy.”

Miss Nevada isn’t buying it. “Are you sure? I could take a look at her if you like. I’m a veterinarian.”

Seriously? She looks like a petite, Asian-American Barbie doll. No way can I picture her elbow-deep in a pregnant cow. Maybe she’s not that kind of vet, though. Still, I’m a little thrown.

“Really?” I say, unable to hide my surprise. She nods. “First in my class at Cornell.”

“That’s really impressive.” My smile falters. I’m beginning to worry about Ginny’s shot at the crown. She’s an Instagram model. Meanwhile, Miss Nevada is the Lucy Liu of veterinary medicine.

Not that any of this matters. It’s nothing but a plastic tiara covered in cheap rhinestones. Ginny needs to move on and do something real with her life. Something like vet school, or at the very least a dog-training class. Then maybe Buttercup would learn some basic social skills.

“Thanks.” Miss Nevada looks me up and down. I can tell she’s wondering what I’m doing here, as I’m obviously not a pageant contestant. My face grows hot for some reason, but thankfully she bends to inspect Buttercup, and I breathe a sigh of relief. I’d much rather the dog be the center of attention than me.

Miss Nevada gives Buttercup a once-over as she continues to squirm and grunt. I’m somewhat reassured by this development. Buttercup’s disdain apparently has nothing to do with me personally. She doesn’t like anyone but Ginny.

“You’re right. She seems fine.” Miss Nevada stands again. She can’t be any more than five feet three, but thanks to her heels, I have to lift my gaze to look her in the eye. “As you said, she’s just . . . shy.”

It’s obvious shy is code for something far less flattering. I have a sudden pang of sympathy for the ridiculous dog.

Maybe Buttercup senses this too, because when I squat to scoop her wiggling bulk into my arms, she goes still. For once, she’s cooperative. “She’s a rescue.”

Miss Nevada nods. “Well, my name is Lisa Ng and I’m right down the hall if you need anything.”

“Thank you. We’re fine, though. Really.” I turn and head for the elevator, trying not to dwell on what a pathetic pair Buttercup and I must make.

When the elevator doors slide open, there’s no escape. I’m confronted by our reflection in the mirrored walls, and the sight is pathetic indeed. My hair has somehow gone even limper, plastered to my head and neck in damp copper strands. The Hogwarts T-shirt, which seemed so quirky and intelligent a few hours ago, seems juvenile in comparison to the fancy day dresses and sleek suits all the pageant contestants are wearing. The pitiful lump of dog I’m holding doesn’t help the situation.

Not for long, though. The elevator stops on every floor, picking up beauty queens all the way down. By the time we reach the lobby, I’m pressed against the back wall, choking on hair-spray fumes and a half-dozen different varieties of perfume. It’s pretty awful, but just as the descending numbers on the display above the elevator doors wind down to 1, an aroma much worse fills the confined space. The stench is horrendous, so thick that I can taste it at the back of my throat. Its pungency obliterates any and all lingering traces of flowery perfume and hair products.

And to my great horror, it seems to be coming from Buttercup.

Every head in the elevator swivels in our direction. Perfectly pert noses scrunch in unison. There’s apparently no doubt that the source of the stench is either me or the dog in my arms. Miss Idaho presses a hand to her flat stomach, as if she might vomit. I wish I could say it was an overreaction, but honestly, it isn’t.

What on earth has Ginny been feeding this creature? “Sorry,” I mumble, longing to feel invisible again. Like usual.

My face burns with embarrassment as the elevator doors slide open and everyone bolts. I’m sure of two things . . .

First, I’m going to murder my sister. Strangling her with her beauty queen sash seems like a really great idea.

And second, for the rest of the week, Buttercup and I will be taking the stairs.