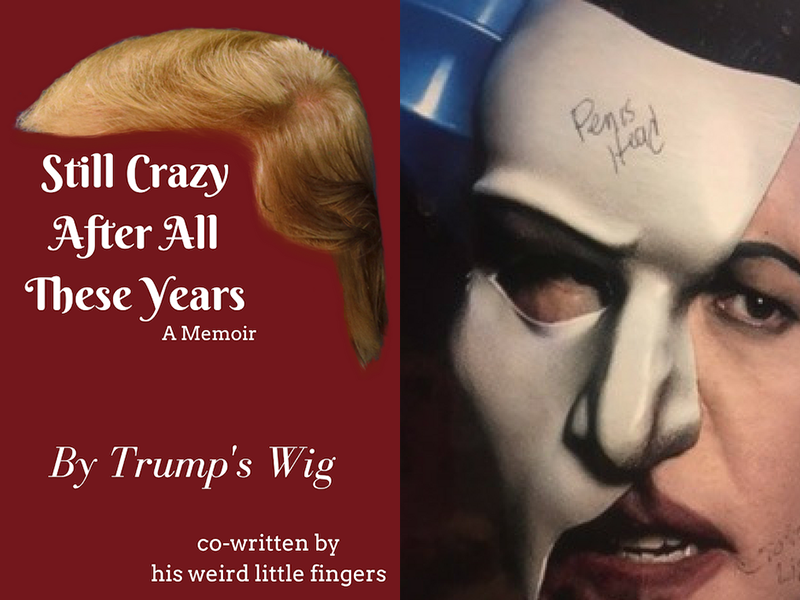 Here at Get Lit, we know how much the public clamors for celebrity autobiographies. Tina Fey, Amy Poehler, Mindy Kaling, and more have changed the game with their bestselling books. And the memoir train just keeps chugging along, with some of this year’s most anticipated books being autobiographical essay collections by Anna Kendrick and Amy Schumer.

Because we are devoted to you, dear readers, and to getting the majorest of scoops, we have collected **exclusive excerpts** from the most hotly anticipated memoirs of these Inanimate Objects, media darlings all.Trenchant. Prescient. Polarizing! From the conceptual to the all-too tangible, these soul-baring subjects are ready to be added to your TBR pile.

1. Still Crazy After All These Years: A Memoir

“Yass GAWD. Honey, I got Donald suh-NATCHED to the heavens, you betta believe! We are working that windblown bird look, the toxic orange sheen, the elusive hairpart that shifts placement on a bitch’s scalp like the shadow on a sundial. Brillo pad REALNESS if we insist on mixing metaphors, yasssss sister wife. Hilary had better think twice before she comes for us, boo. She thinks pneumonia’s hard? Wait ‘til she has to lipsync for her legacy, okurrrr?! We will drag that shady beyotch for filth. And if you don’t believe me, just ask my crew, aka THE legendary Misses Mike from the House of Pence, mama, you betta come thruuuu!!!”

2. Someone Left The Cake Out In The Rain Or My Struggle

“2003. I thought I’d hit my rock bottom with Robert Atkins. I was desperate. Grotesque. Passé. When I no longer had the strength or nutritional composition to step up to the plate, bacon was waiting in the wings to take my place. The Eve Harrington to my Margo Channing, meat prevailed where I floundered. Its grease and juices glistened under the spotlights while I was banished to garbage bins across the country. Hamburgers eschewed their buns for lettuce’s cold embrace. Birthdays were cakeless. Paneras became speakeasies for the gluten addicts, and crumbs of bread bowls were found scattered in back alleyways, where the junkies fought with pigeons for scraps. Silly me. I thought those were my darkest days.

But nothing…nothing could prepare me for Paleo.”

“Once upon a time in the garden of Eden there was a demon named Lilith and an angel named Lailah. Where Lilith was vengeful, wreaking death and destruction, Lailah was the benevolent chooser of souls. At the prospect of your soul, she presents a drop of you to God and says, “Sovereign of the universe, what shall be the fate of this drop? Shall it produce a strong man or a weak man, a wise man or a fool, a rich man or a poor man?” (So it is writ.)

When God makes his judgment, Lailah watches over this drop of your soul as you grow in the womb. At the base of the mother she lights a candle so that you, not yet born, may see your path, its rewards and its punishments. Before you are birthed, Lailah gives you a pinch above your lip so that you may forget all that you have learned, all that she has taught you. Thus, your philtrum.”

by A Chain Email

“Hello pleas you have read this messag!!!! If you do not read this massage and email to seventy seven friends by the end of the week you will be very sory. Do not be like me my friend. I did not fward this email to seventy seven of my friends when i received it from a nigerian prime minister and now i am dead. Vary VERY dead. Deader? Not posible. If you do no fwd you will be dead like i amd ead. It will be vry painful like it was for me, have you seen the ring? Or if you are a jerk you are probably saying no, i did not see the Ring but I did see Ringu the original japanese which is very much better. To which i say shut up stop being such a asshole. This is why ppl dont like you. This iswhy you get this chain mail spam. You are like the one who says the new ghostbusters with ladies runed ur childhood. Like please. Wat i mean is if u have seen the ring or FINE the ringu than u get my gist. That chic was scary as hell and u will have to kiss her 4 eternity if u do not forward ok ty”

by A Poster in the Subway

“Come with me backwards through time, before I was what I seem: a film in reverse; bridge and tunnelers regressing jerkily up the subway steps; a youth’s stubbed cigarette relighting, re-lifting to his lips, smoke billowing back into his throat; when I was just a poster for the revival on Phantom on Broadway smoothed across the station wall. I didn’t know then quite how limited my engagement would be.

Sometimes I wonder what I did to deserve it, this “penis head,” scribbled heedlessly with sharpie. O Sweet Bird of Youth. This artist, did he not consider the repercussions of his actions? Naturally, he didn’t. He is young. Time to him is something that comes in fistfuls, in gallons, in bottomless fathoms. He did not think that I would have to wear this badge of irreverence until I am re-plastered with a hipster-pandering Seamless campaign. All he thought was, “penis head.”

I myself am not above comedy. I must admit that this is not only a real crackup but also a sick burn. This platform poet, he had a message, and my half-masked face, this expanse of white, was his means to my end.”

[With a 244-page insert of 4-color, gloss-finished, Zapruderian illustrations from the viral Instagram.]