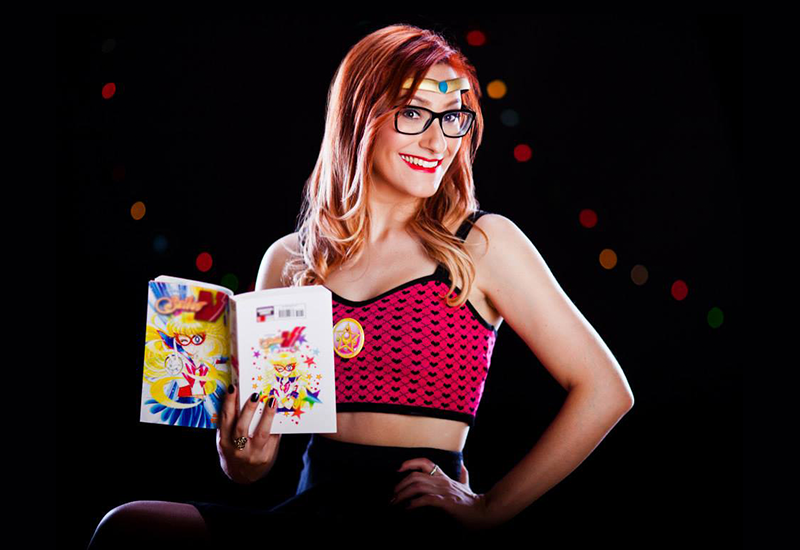 Each week we share a pop culture diet from someone that we think is glom-worthy and help you find new things to glom on to!

We’re so excited that Sam Maggs—Awesome Geek Feminist and Associate Editor of The Mary Sue, a site that we love here at Glommable—is joining us this week to share her Pop Culture Diet! She also recently published her first book, The Fangirl’s Guide to the Galaxy, an indispensable and fun reference on everything from surviving Cons (on your costume: “figure out how you’re going to pee in it!”) to defeating online trolls. Order your copy at Amazon, Barnes & Noble, or IndieBound. Sam, take it away.

I spend my life being a fan of things, and it’s a pretty good way to live. Not only do I get to be passionate about comics, video games, movies, and TV shows in my spare time, but I also get to spend all day writing about them, too! That’s why I couldn’t be more stoked to share with you my pop culture diet over the course of one week. It’s going to seem like there’s a lot here, but hey – a girl’s got to keep up with what’s new, you know what I’m saying?

Sunday is a huge night for TV, but I usually lame out and go to bed early – which means Monday is a time to play catch-up! First is always Game of Thrones or else I know I’m going to get spoiled online in a hot minute. I’ve read the books, but in this current season the show’s plotlines are starting to seriously diverge from the source material, so I’m in a position to get spoiled just the much as the rest of you Unsullied (that’s people who haven’t read A Song of Ice and Fire, obv). Mostly, I’m stressed about Sansa’s storyline – what is she doing with Ramsay Bolton? He is a grade-A creep and she needs to high tail it out of Winterfell so fast that not even Bran sees it coming.

Then it’s on to Orphan Black!

I love everything about this show. It gets better every week. The writing is so incredibly clever, the characters so likeable – even people you once hated kind of become your weird faves (see: Donnie Hendrix). Plus, Tatiana Maslany is such an amazing actress I always forget I’m not watching a bunch of different people. Where are her Emmys?

After that, it’s time for Penny Dreadful. This is, hands down, my favorite show on television, because it’s basically like it was made specifically for me. I did my Master’s degree in Victorian literature, and specifically Sensation Fiction, an offshoot of the penny dreadful genre, so every week it’s like being transported into my own personal heaven. A heaven that happens to be super creepy and terrifying, but I’m into it.

I need a bit of a TV break after Monday, so I’m going to spend my evening catching up with the giant stack of unread comics I keep next to my bed. I have a pull list at my local comic book shop, so I never miss an issue, but I definitely tend to fall behind when it comes to actually reading them. I have so many favorites, but top of my list is always Marvel – they’re killing it right now with their lady-led titles. Ms. Marvel is awesome, about a 16-year-old Pakistani-American Muslim girl in Jersey City who discovers she can shapeshift; but so are Thor (now a woman!), Spider-Woman, Captain Marvel, Angela: Asgard’s Assassin, Black Widow, and Storm. Seriously though, my favorite Marvel comic right now is Squirrel Girl. You might laugh, but – actually, keep laughing. It’s the funniest comic I’ve ever read, and you’re really missing out if you don’t pick it up!

Of course, there are comics outside the Marvel universe, too. IDW’s Jem and the Holograms is delivering awesome representation and an outrageous story (obviously); DC’s Batgirl and Gotham Academy are total highlights; and Image’s Rat Queens and Wayward bring some great lady-led stories, too. Uh… as you can tell, I do a lot of comics reading.

It’s time to play video games for like, eight hours after work. I’m replaying my favorite series, Mass Effect, and I’m close to the end of the final game. I’ve written a bunch about why you should play Mass Effect, but seriously – you should play Mass Effect. I’m dreading coming to the end of the game again because last time I just sat on the floor and wept for thirty minutes after completion, and I don’t know if I’m ready to go through that sort of emotional trauma again. I’m going to stop before getting there.

Before bed, I hop on YouTube and watch Leigh Lahav’s newest adorable animated video for fangirls. To try and get sleepy, I hit up ALBinWhisperland and watch one of her ASMR hairbrushing videos with soft affirmations. Nothing makes me feel nicer than ASMR!

Time to watch a little more TV! I’m loving iZombie right now, by Rob Thomas, who previously brought us Veronica Mars. Shows with a smart and sassy female lead are always my fave, and iZombie is not disappointing. I also flip on Hulu and catch up on some classic episodes of Sailor Moon. They put two new remastered episodes up every Monday night, and I like to binge watch whole chunks of the series. They just got into the S run (with Sailor Saturn!), and it’s really getting good. Once I re-watch the whole series, I think I want a tattoo of Sailor Mercury’s transformation pen.

For my super-hoppin’ Friday night, I’m going to read some books! Once a year I try to re-read Tamora Pierce’s Tortall books. I’ve finished her Lioness Quartet, and I’m on to my favorite series, The Immortals Quartet. She based the love interest in this one on Jeff Goldblum (sigh!). I’m also reading Melissa Grey’s new book, The Girl at Midnight, which puts some magic right into New York City. I’ll read anything where a girl lives in the New York Public Library. I also am absolutely obsessed right now with Rachel Bach’s Paradox trilogy – it’s about a kick-ass female space merc and is basically Mass Effect meets Firefly.

That’s my week in pop culture consumption! Not too bad! What are you loving right now? Let me know on Twitter @SamMaggs!