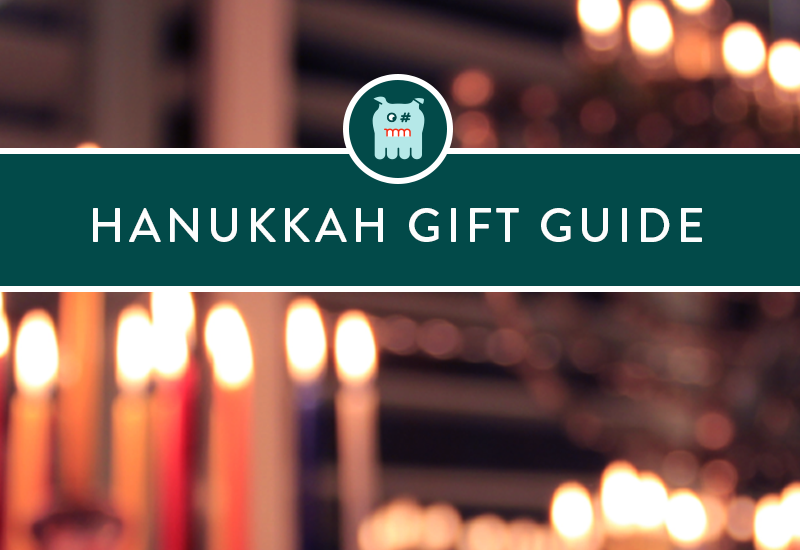 It can be a real stumper, trying to think of presents for loved ones who celebrate Hanukkah. Growing up, I felt like something of a Heeb hot shot—I was able to get eight whole presents for eight whole days! That’s a whole lotta Beanie Babies.

(Related: 7 Gifts Under $30 To Delight The Book Lover In Your Life)

But now that I’m doing whole gift-giving, adulting thing, the prospect of finding thoughtful gifts for each day can be a tad stressful. When the candles have been lit, when all the gelt has melted into their gold foil casings, when the last dreidel ornament has been hung on the Hanukkah Bush, turn to this gift guide to give you an idea of what to get.

1. The Complete Maus by Art Spiegelman

This 25th Anniversary edition of the famous, groundbreaking Maus graphic novel is a must-have for any book lover, even those not inclined towards graphics novels. Art Spiegelman’s grueling and unforgettable retelling of his relationship with his father, a Holocaust survivor, illustrated by terrorizing cats and their mice victims, is completely essential.

Including Parts I and II, this book is a gamechanger of the genre, and paved the way for ensuing graphic classics like Persepolis and V for Vendetta.

2. Here I Am by Jonathan Safran Foer

From the acclaimed author of Everything Is Illuminated comes Here I Am, just out this September and a staple of literary year-end lists. Fans of Safran Foer have been waiting 11 years for this new book by a man known as a literary wunderkind, and Here I Am does not disappoint: one fractured family, the Blochs, finds themselves grappling with their identity as a family, mother, daughter, child, Jew.

This author of Extremely Loud and Incredibly Close uses a deft hand when he writes of tragedies (Jewish-American and otherwise) and his new book is an essential read for the tumultuous year we’ve had.

This fictionalized bildungsroman of Chabon’s own relationship with his father and the history of his family, from the invasion of Germany to a retirement village in Florida, is a poignant and unforgettable portrait of a Jewish-American lineage. It’s about the stories we tell ourselves about ourselves and how they echo interminably down the family line. Like Safran Foer, Chabon is an esteemed Jewish writer who explores the nature of hereditary trauma and storytelling with tenderness and wit.

May I suggest a companion piece? The incredible column Chabon wrote about his youngest son’s passion for fashion. I think about it once a week and it never fails to make me smile.

4. The Boston Girl by Anita Diamant

This list has been rather man-heavy, hasn’t it? Lots of fathers and sons trying to break free of their masculine flesh-prisons, etc. Let’s switch now to The Boston Girl by Anita Diamant, one of the most essential Jewish writers we have today.

Diamant takes us on a journey through the world of Addie Baum, the daughter of a Jewish immigrant family, from the cusp of the 20th century through its close. From Dinah of The Red Tent to Black Ruth in The Last Days of Dogtown, Diamant has an incredible talent for rendering full, rich, wonderful female protagonists, and Addie is no different.

5. Hershel and the Hanukkah Goblins by Eric A. Kimmel

Hanukkah is not complete without a perusal of Hershel and the Hanukkah Goblins, one of my absolute favorite books as a kid. With mondo-cuckoo-amazing illustrations by Trina Schart Hyman, this one is full of wonder and delightful creepiness that totally enchanted me in my youth—and still tickles that childlike part of my brain.

My personal favorite goblin? The greedy dude who is so very eager to eat a kosher pickle that he gets his chubby goblin paw stuck in the jar. What a doof!

6. The Devil in Jerusalem by Naomi Ragen

Naomi Ragen sets this thrilling and dark mystery in Jerusalem, where detective Bina Tzadek is attempting to uncover the truth about an American mother and her two children, who have been admitted to the hospital with terrible, brutal injuries.

It may not be the cheeriest read, but it’s undeniably fascinating: Ragen’s exploration of Jewish mysticism in the modern era, from Kabbalistic ritual to cult-like fervor, is an incredibly absorbing look at how the holy land and all its rich histories take their toll on an insular family, whose secrets and lies are on the verge of being unraveled by a kickass female protagonist. Mazel!

Arguably the grand masterwork of America’s preeminent, potentially Jewishest(?) writer, Portnoy’s Complaint feels like one of those books that everyone just has to read, especially if your pal is a straight white guy in an MFA program. (Get him Consider the Lobster and The Old Man and the Sea for an extra-masculine holiday bundle.)

What could be more Jewish than a man laying back on his psychoanalyst’s chaise and detailing all the pervy, masturbatory oddities that crowd his mind, which of course he blames on his poor mother back in New Jersey?? If you feel as squicky about Woody Allen as I do, the 25th Anniversary edition of Portnoy’s Complaint is the perfect substitute gift, instead of another Blu-ray of Annie Hall.

8. No One Is Here Except All Of Us by Ramona Ausubel

No One Is Here Except All of Us is the debut novel from an astonishing and beautiful literary voice that has since brought us the stunning short story collection, A Guide to Being Born, and most recently, Sons and Daughters of Ease and Plenty.

Ausuble based her novel on the real life story of her own great-grandmother, opening on a small village in Romania in 1939 (which, as we all know, NOT a good year. Just mostly a shitty decade. The 40s too). Narrator Lena tells the story of the tragedy the Romanian families undergo, and how they reemerge and renew themselves in the face of unbelievable loss.