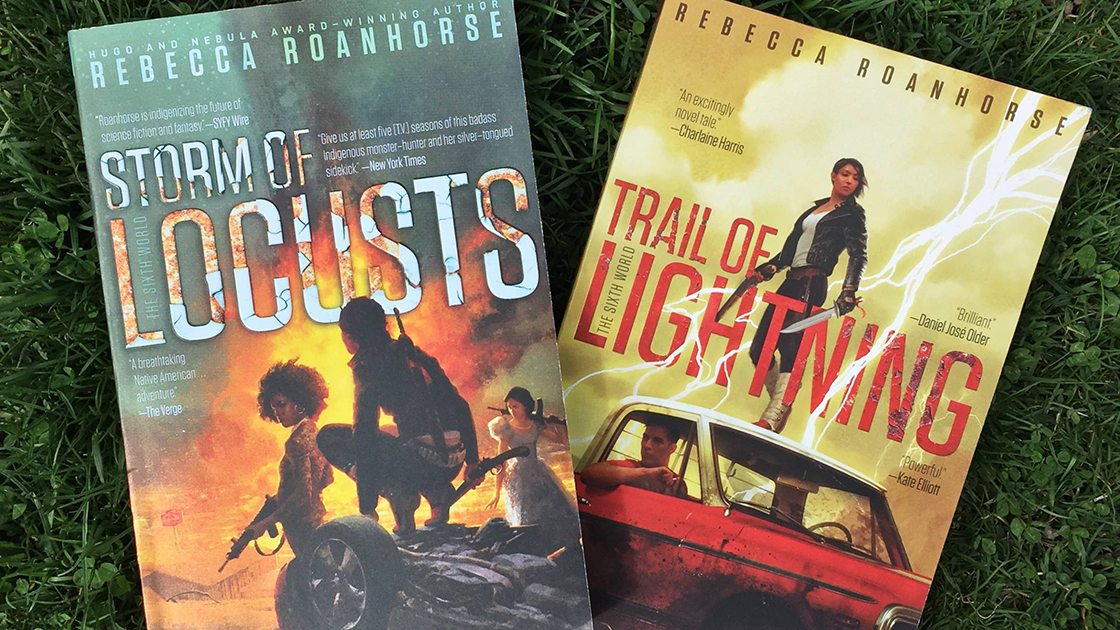 We are thrilled to welcome Hugo and Nebula-award winner Rebecca Roanhorse, co-author of Trail of Lightning and Storm of Locusts, to Get Lit today! In honor of Indigenous Peoples’ Day, she’s recommending three books by a few of her favorite Native authors. Thanks for joining us, Rebecca!

Right now, Native literature seems to be experiencing a long overdue boom. With works by Tommy Orange becoming a Pulitzer Prize finalist, Terese Marie Mailhot’s memoir hitting the New York Times bestseller list, and Angeline Boulley’s YA debut selling at auction for a rumored seven figures, it feels like Native voices are breaking into the mainstream in a big way. Here are some of my faves.

A novel told in alternating voices and vignettes, Buckskin Cocaine offers a glimpse into the incestuous and competitive world of Native filmmakers. The strivers, the oversized egos, the up-and-comers—they are all here, and they converge in the city of Santa Fe for a film festival that will expose their darkest desires and secrets. The book is raw and avoids any of the overwrought stereotypes found in a lot of Native fiction in exchange for gritty and difficult voices that resound with truth. Wurth also released a book in March entitled You Who Enter Here, which is a fictional look at gang life in New Mexico and reservation border towns that is described by the publisher as “[a story of] terrible darkness, but also, unexpected beauty and tenderness.”

Jones is a prolific and award-winning horror writer. His contemporary werewolf novel, Mongrels, was nominated for both the Bram Stoker and a Shirley Jackson award in 2016. Mapping the Interior, his most recent novella, won the 2017 Bram Stoker award and is told primarily from the perspective of a fifteen-year-old boy whose dead father has come back to life as a ghost. Any benevolence on the part of the ghost is quickly put to rest as the boy realizes his father has returned for his own purposes, and they aren’t good ones. It’s a story about fathers and son and cycles of violence, but it’s also a tense and creepy old-fashioned haunting. Jones has a new novel coming out in April of 2020, titled The Only Good Indians, which looks to be just as brutal, unflinching, and haunting as his other works. I cannot wait.

I’m a fan of Little Badger’s short fiction, including the Apache Victorian Gothic “The Whalebone Parrot” and her short horror “The Famine King.” I’m excited to read this author’s first foray into longer fiction, Elatsoe, which will be her YA debut in 2020. It’s described as a ghost story informed by Indigenous ancestral magics. At the heart of the novel is a murder mystery and a small town full of secrets. Sounds promising.

Read on to learn more about Rebecca’s books and the novels she recommended: