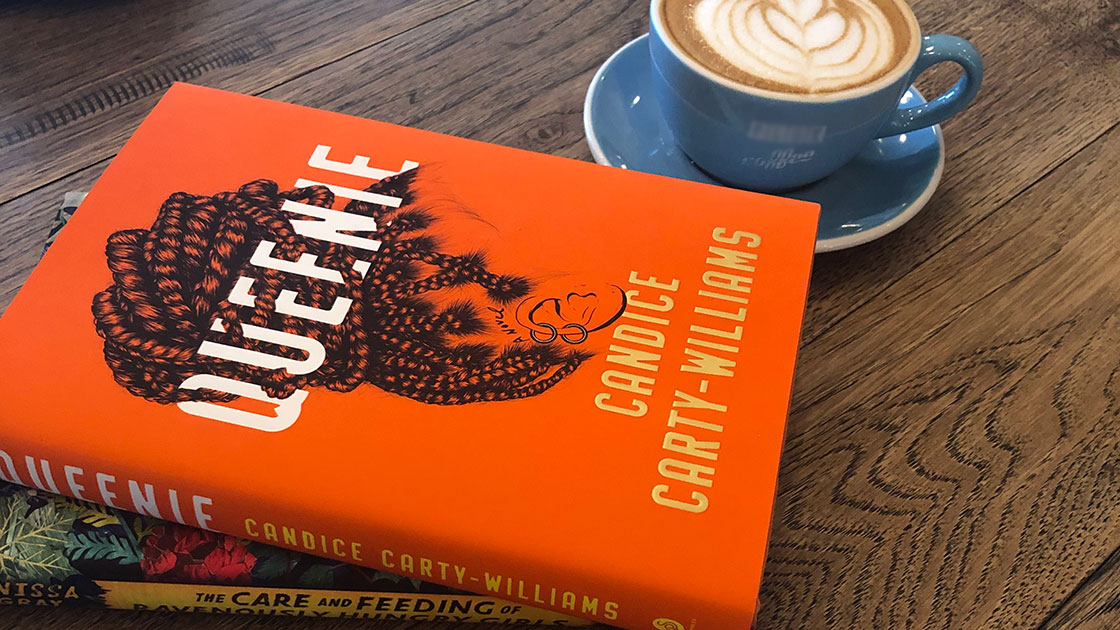 TBH I often judge books by their covers… I know that seems wrong to admit, given that I work in publishing. If I’m not familiar with the author/title, the cover art is what hooks me and makes me take the step to read the description and buy it. So it’s no surprise that this gorgeous art is what drew me in, but Queenie’s relatable moments of adulting struggles is what had me flipping through to the end.

We live an ocean apart and come from different cultures, but I recognized a lot of myself in Queenie. Check out this excerpt below and you’ll see what I mean.

I was as surprised as the next person that I’d moved into a house with strangers from the Internet. The prospect itself filled me with dread, fear, and a healthy amount of disgust, but £21K a year wasn’t going to get me anything bigger than someone’s garage space.

The housemates themselves didn’t seem awful, but I felt very nervous at the prospect of living with white people, because I know that my standards of inherited Caribbean cleanliness are bordering on clinical OCD levels.

I grew up watching my grandmother wash bottles, cartons, every-thing, before they were allowed to go into the fridge, and she’d clothesline you if you walked your shoes through the house.

Living with Tom didn’t count because I’d trained him up and we’d had some clean-house trial runs when we stayed at his family holiday home in Turkey that almost, but didn’t quite, break us.

I’d been shown around my new house by my prospective housemates: a boy, Rupert, twenty-nine, a little shorter than me and markedly angry about it, didn’t make eye contact; in essence, little more than a posh boy with a beard and those deck shoes and no socks. Even at the end of October.

The girl, or woman, Nell, is thirty-five, works in a deli, and wears her short blond hair in high bunches. She is the nicer of the two, and has already admitted that she has a drinking problem, demonstrated when she opened the door to me with an XL glass of white wine in her hand at 11:30 a.m.

As bad as that was, it was the best of some very, very bad housing situations. How do seven people live together and share only two bathrooms? was my first question when I saw room number one in Stockwell, on the top floor of a narrow four-story house. All four stories were a mess, which I suppose is unavoidable when seven are squashed into a five-bedroom property that is shoddily converted into more rooms with, in one case, a sheet dividing one large room in two.

I had to step over at least ten bikes on the way in, and the kitchen was so cluttered that I could have sworn whoever lived there was playing crockery Jenga.

The bedroom, a steal at £800 a month, was absolutely tiny. I’d barely be able to fit my bed in there, let alone the books I’m deter-mined to carry through life with me.

When the tiny posh boy in a decorative dirty trench coat and flip-flops who showed me round let me out and told me he’d be in touch, we both knew that it wasn’t going to happen. The second place I went to see was a studio in Camberwell. Completely out of my price range, but I’d watched a YouTube tutorial on haggling that I was going to put into practice. I had to use Citymapper to find my way to it, so obviously I was sent on an urban scenic route all around the houses.

The area was looking very gray, but as expected the app sent me the wrong way, so I cut back through the not-so-Camberwell-Green-in-winter park with its little playground in the center.

I was running late, so when I eventually turned onto the road that the flat was on, passing a fleet of Nigerian men sitting and chat-ting in fancy cars, I was sweating from every pore. I walked toward number twenty-three, looking up and down at my phone map so much that I was like one of those nodding bobblehead dogs you used to get on car dashboards.

“Hello, lovely girl, are you my five o’clock?” a man with a strong Polish accent asked as he stepped out of the car that he’d parked next to me at speed, bringing the stench of stale cigarettes out with him. His suit was cheap, his hair thinning.

“Queenie. Sorry, yes, I got lost.” I took off my coat and put it through the strap of my rucksack.

“Okay, don’t worry, I have someone else coming in five minutes, so quick, quick!” He smiled in a way that suggested he thought I would be charmed. Why did they do this, this organizing of forty viewings at a time so that everyone panics and throws money at these overpriced and underkempt boxes masquerading as flats?

When we’d made it in, me having to contort myself so that we didn’t merge into one person in the three-inches-squared space of hallway, I stood in the flat trying to calculate how I’d fit any of my furniture into an area so small. The estate agent shocked my socks off and out the door by telling me the price of a month’s rent. “Twelve hundred pounds?” I shrieked, holding a hand to my mouth in a move usually deployed to express faux shock. This was real shock.