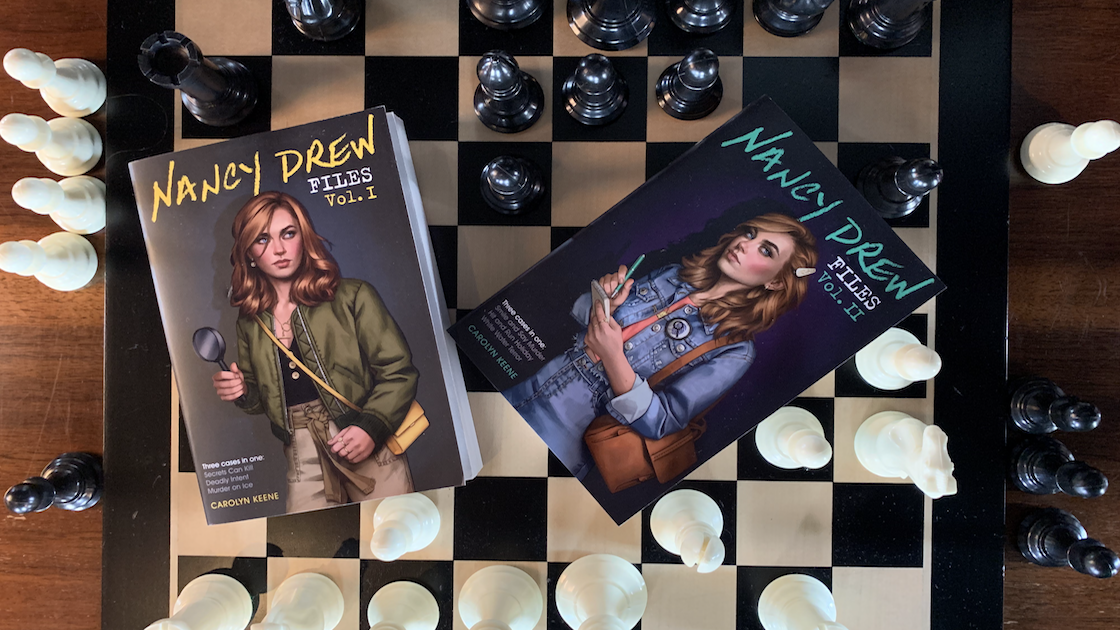 I’ve always been a voracious reader, and some of my favorite childhood memories involve books—reading way past bedtime under the covers, lugging home bags of books from the library, friends getting mad at me for wanting to read at their sleepovers, and reading out loud scandalous passages of books, such as Judy Blume’s Forever on the playground. My mother is also a big reader, and I always felt such a connection to her when she would hand me copies of books that were her favorites from when she was growing up. During those moments, I didn’t see her as “just” a mom; I could picture her as another little girl like me who would rather be reading than doing anything else. Her copies of the Nancy Drew Mystery Stories series were among the many books she passed down to me.

I can still picture the covers: they always seemed old-fashioned with this serious-looking redhead, always in a dress, who always seemed to be caught in a kind of creepy situation. I definitely read the first couple of books, The Secret of the Old Clock and The Hidden Staircase, and all the others, but I don’t remember most of their names or what they were about. I just remember being drawn to the fiercely independent Nancy and her friends, “plump” Bess, “tomboy” George, and her steady boyfriend, Ned. They always were solving some cool mystery and going on fun adventures in Nancy’s sports car.

I don’t know how old I was when I stopped being interested in Nancy Drew, probably when I discovered the series that I have the most nostalgic affinity for, Sweet Valley High. But when I heard the CW was coming out with a Nancy Drew series that was more like a dark soap opera, Riverdale style, I decided to see what my girl detective has been up to since I stopped reading her in the 80s. Was she still wearing those prim fit and flare dresses and did her hair still have that iconic little flip?

It turns out Nancy has been up to a lot! She’s always changing. This character has nine lives! I had no idea that the series had actually started in the 30s, and then was revamped in the 50s and 60s, the time period I was reading from. In the 80s and 90s, the series changed from the Nancy Drew Mystery Stories to the Nancy Drew Files. The spinoff was a little more edgy than the original, and apparently Nancy and Ned had a bit of a dysfunctional relationship. And then in the early 2000s, the series changed again to Nancy Drew: Girl Detective. In these books, Nancy has adapted to the modern world: she drives a hybrid, uses a cell phone, and  narrates the stories. Then, in 2013, the Girl Detective series ended and the Nancy Drew Diaries began. The current series is also written in the first person and incorporates current pop cultural references.

Although part of me wishes that we would leave beloved characters like Nancy Drew alone and keep them in a time capsule, I understand why changes have to be made to attract new generations. Even though I’m a retro Nancy Drew lover, I know I’ll end up bingeing Nancy Drew when it shows up on a streaming site (the series debuts on the CW on October 9) to see what my old friend has been up to after all these years.