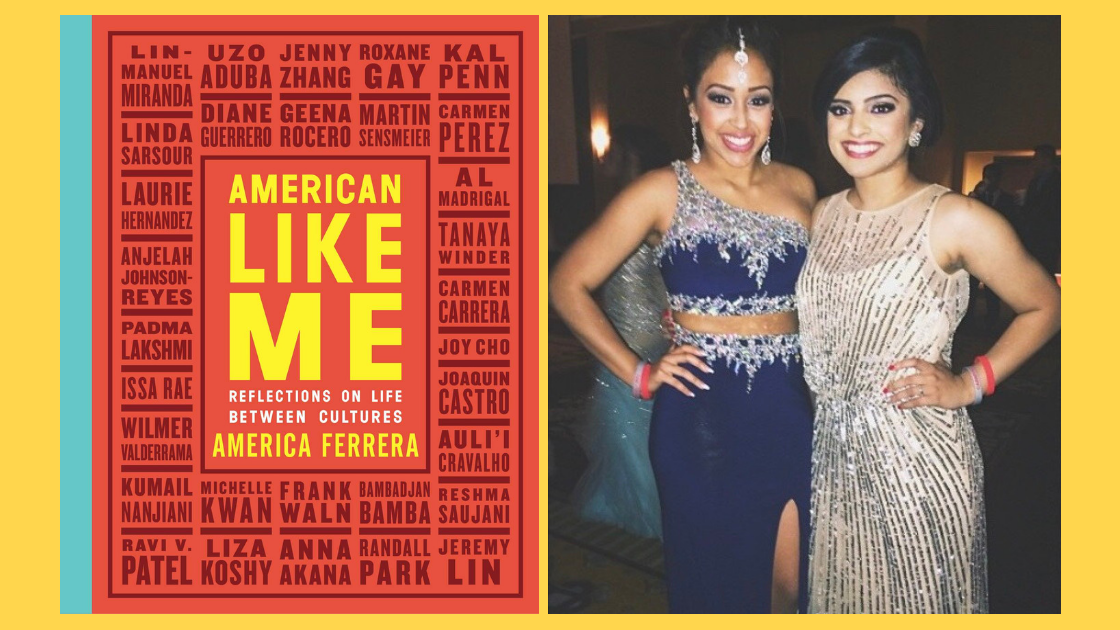 America Ferrara’s American Like Me is pretty incredible. It’s a collection of essays by America and her (celeb) friends on their personal experiences of “life between cultures” and features an amazing list of contributors including Uzo Aduba, Linda Sarsour, Issa Rae, Roxane Gay, Michelle Kwan, and Liza Koshy.

Some of the stories are heartfelt and sad, some fierce, and some downright hilarious—but all of them tell an American story, and in each story can we find a part of ourselves.

I was lucky to read these essays well before the book came out, and also attend an event with America Ferrara, Uzo Aduba, and Linda Sarsour. And now I want to share a piece of this book with you.

Check out a preview of Liza Koshy’s essay!

Sometimes when I tell certain circles of people that I grew up in Houston, Texas, they get a pitying look on their face and say, “Ohhh, wowww, so you must have had to deal with a lot of racism growing up. . . .”

They give me those sad, knowing eyes, crinkling up their noses in a concern-troll kinda way, like they really feel for me and my brown skin. Then they keep going.

“I mean, you know, since you’re . . .” They pause, considering my ethnicity, realizing they’ve just backed themselves into a corner. Because they have no idea what I am.

I am brown. And people have no idea why. It must be very stressful for them. But I like being racially ambiguous. Forever the ethnically mysterious little brown girl. People have mistaken me for being Polynesian, Puerto Rican, Mexican, Brazilian . . . the list goes on and on. And people aren’t wrong to be confused. I mean, I do look a little bit like I’m from . . . the whole entire world.

My own hair doesn’t know what I am. It is dark and curly and sometimes I wake up with a morning Afro. And even though my skin is mostly brown, it is also very, very white in all the places where the sun doesn’t shine. My father immigrated here from Kerala, India, when he was sixteen. And my mother is a white lady from Virginia. He is dark chocolate, she is white chocolate, and I am their smooth milk chocolate. I am biracial, but growing up in the humble Houston suburb of South Braeswood made me so much more.

I consider myself extremely fortunate because South Braeswood was one of the most racially integrated places I’ve ever experienced. I grew up around equal numbers of Mexican kids, African-American kids, white-blond Baptist kids, white dark-haired Jewish kids, Asian kids, and, yes, even Indian kids. And we were all friends.

It was a place where people like my parents could thrive. Their love wasn’t forbidden or difficult. No Romeo and Juliet drama for them. They got together and had three biracial kids—and they didn’t struggle to equally share their white and Indian cultures with us. Even though my mother’s church was Mennonite, which I’m thinking is about as white as they come, she was also a yoga teacher with Asian and Latino best friends. She loved Indian food and made our home into a baroque sanctuary of Indian culture with Indian carpets and artifacts from my dad’s background. She raised me to appreciate a good white-dad joke, and we regularly ate both corn on the cob and curry. But she didn’t push anything on me either. She never insisted that I share in her obsession with the ancient Indian yoga practice, but rather, let me twerk at dance practice. She was visionary enough to let me come to the realization on my own that I can’t twerk. Because, as I learned, there’s a big difference between having a “butt” and a “booty.” And I have neither.