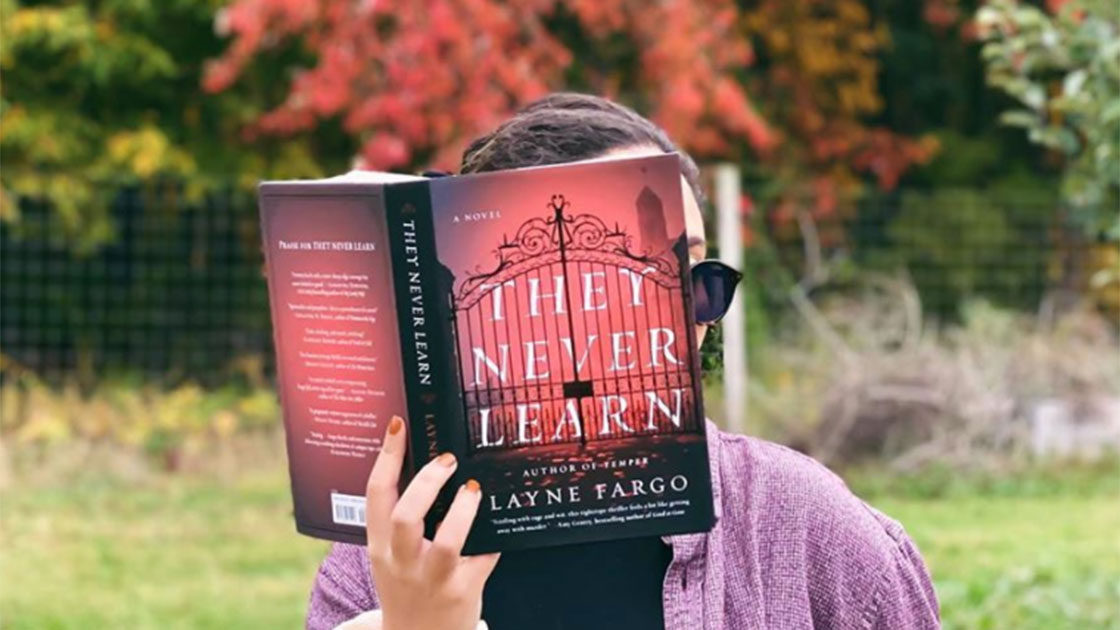 From Layne Fargo, author of Temper, comes the new psychological thriller They Never Learn with a chilling premise: a professor who doubles as a serial killer. Every year, Professor Scarlett Clark finds the worst man at Gorman University and kills him. But when she falls for the ex-wife of her next target, she risks the exposure of her secret life. Meanwhile, college freshman Carly Schiller is trying to blend into the background and relishes her freedom away from her abusive father. However, when her roommate Allison Hadley is sexually assaulted at a party, Carly vows revenge.

In this special selection from They Never Learn, it’s the beginning of the end for Scarlett’s victim. We join Scarlett as she waits patiently in the garage of a fraternity house for her plot to unfold.

I’ll know it’s working when he starts to scream.

But for now, I wait. I snuck into the garage an hour ago, when it was still pitch-black outside. I’m dressed to match the shadows, a hood pulled up to hide my vivid red hair, face scrubbed clean of makeup. No need to look pretty for this.

There aren’t any vehicles in here, just some old exercise equipment sitting on scraps of carpet, stale sweat and mossy body spray hanging in the air. I’m pressed into the back corner behind a set of warped metal shelves. Enough to conceal me, if I stay extremely still. I keep my breathing steady, focusing my gaze on the peeling red vinyl of the weight bench, the small gashes in the material like open wounds.

Footsteps slap the pavement, and the side door to the garage swings open. Right on time. A young man comes in, swabbing the sweat off his brow with the hem of his T-shirt.

Tyler Elkin. Star athlete, and one of the worst students I ever taught in my Intro to English Lit class. As starting quarterback, he took the Gorman University football team all the way to the conference championship last season. That was before the rumors started.

He tugs his earbuds out and swipes his thumb across his phone screen. Music starts blaring from a small speaker set up on a crate beside the weights, a screamy white-boy wannabe punk rocker whining about some girl who broke his heart. That bitch, how dare she.

It sets my teeth on edge, but I don’t move a muscle. I can’t risk Tyler seeing me. Not yet.

Tunelessly humming along, Tyler walks to the dented mini fridge in the corner and removes a glass bottle. He tosses the cap onto the floor and takes a long pull of the liquid inside. It’s an energy drink he makes himself, with activated charcoal, cayenne, and several raw eggs. Smells awful, and tastes even worse. I tried it myself, after brewing up a batch based on the instructions on his Instagram. Then I added my own special ingredient, mixed right in with the rest of the bitter grit at the bottom.

He made a video on his “kickass morning routine” too. He starts his day the same way, even on weekends: up at 5:00 a.m., hours before his fraternity brothers, for a brisk run along the path by the river at the edge of campus. He always pauses to take a photo of himself with the sunrise saturating the background. Then he comes back here, to the garage behind the frat house, for weight training. He’ll down half his energy drink now, the other half once his workout is done, while he captions his sunrise selfie with some inane motivational message. Rise n grind. Make 2day yr bitch.

Tyler polishes off another gulp and wipes his mouth. He has full lips and long eyelashes, which renders his face almost feminine from certain angles. He could be a model, one of those sun-burnished Abercrombie boys tossing a ball back and forth in matching madras shorts. It’s clear from his social media he considers that his backup plan if the whole football thing doesn’t work out. A boy like Tyler, he could have any girl he wanted. But where’s the fun in that? It must get boring after a while. Not that that’s any excuse.

Tyler lies back on the weight bench and starts raising and lowering the barbell in time with the music. Until his rhythm slows, stutters. His fingers wrap tighter around the bar. Then they spasm, and he almost lets go of the weight, dropping it on his catalog-perfect face.

My breath catches. That would ruin my whole plan.

Excerpted from They Never Learn by Layne Fargo. Copyright © 2020 by the author. Used by permission of the publisher. All rights reserved.