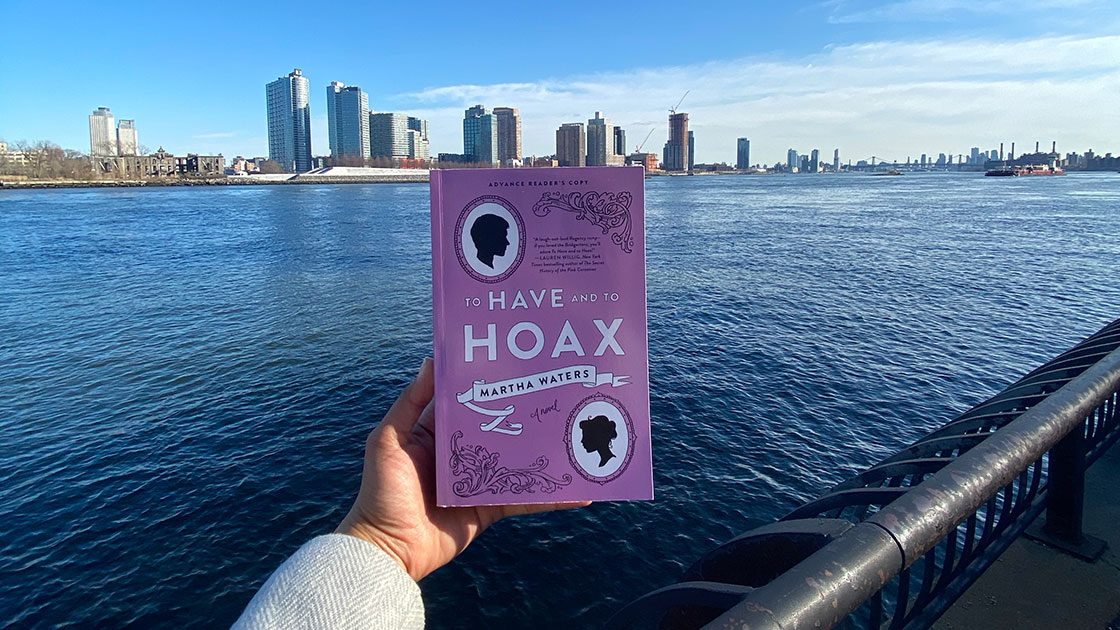 To Have and to Hoax by debut author Martha Waters is a true bundle of laughs. This Regency rom-com stars the delightful Lady Violet Grey and revolves around her battle of wits with her husband, Lord James Audley. After five years of marriage, four of which have been subpar, a prank war ensues between them. Both develop elaborate schemes involving fake illness and even rope in their friends, all with the goal of getting the other’s attention, but will it save their marriage? We’ve been head over heels for these sharp, witty characters since the moment they met, so we wanted to share the love by previewing their first scene for you here.

In this special selection from To Have and to Hoax, we find Violet in the thralls of her first London Season, where she becomes more curious about what “Ruination” might entail than silly waltzes. Against her mother’s warnings, she heads out to the balcony in search of these so-called Ruinous acts, where she encounters “the most handsome man she’d ever seen” a.k.a. Lord James Audley. Let the swooning begin!

“So you’re Lady Violet Grey, then. Penvale’s spoken of you.”

Violet gave him her most charming smile. “All good things, I expect?”

“He said he once caught you and his sister swimming in the lake in your chemises,” Lord James said shortly. His mouth quirked up, lessening the effect of his severely furrowed brow, and he added, “So I suppose it’s a matter of opinion. For example, I doubt your mother would consider that to be a good thing; to an eighteen-year-old lad, however, I must confess it was rather intriguing.”

“My lord, I do think it rather early in our acquaintance for you to be discussing my undergarments,” Violet said, grinning at him. A startled laugh escaped him before he seemed to realize it was happening, and it made her like him more.

“At what point would that be considered appropriate, then? I’m not entirely knowledgeable about the intricacies of etiquette.”

Was he… flirting with her?

“Certainly not until we’ve danced at least twice,” Violet said firmly. And was she flirting in return?

“After all, I have very delicate sensibilities that you are at risk of offending,” she added, and was rewarded with a quick flash of a smile in the darkness. It quite transformed his face, for all that it was so fleeting. She felt, absurdly, in that moment that she would have done a great deal to receive another one of his smiles.

“I rather think you’re more at risk of offending mine, all things considered,” he replied dryly. At this mention of the circumstances under which Violet had been discovered, she felt herself blush. It was maddening.

“My lord,” she said stiffly, “I would ask you to please not mention—”

“You need not even ask,” he interrupted. “I wouldn’t.” He didn’t elaborate further, but she believed him instantly.

“I can’t imagine what you must think of me,” Violet said, giving a laugh that she hoped would pass for casual and worldly, as though she were frequently found embracing gentlemen on balconies at balls. Her heart pounded heavily in her chest, though, and she realized in a moment of clarity that she did, in fact, care what Lord James Audley thought of her, despite having made his acquaintance a mere five minutes earlier. It was rather vexing, considering that she prided herself—much to her mother’s dismay—on not giving a farthing for anyone’s opinion but her own.

She realized that somehow, without her noticing, he had moved closer. She found herself being forced to crane her neck upward at a sharper angle than she had moments before, and Lord James’s broad shoulders blocked out some of the light emanating from the ballroom behind them. They were standing entirely in the shadows now, and even had someone chanced to wander onto the balcony at that moment, the interloper would have been hard-pressed to see them in their current position. The thought made her feel curiously breathless.

“I think that you’re the most interesting young lady I’ve met so far this Season,” he responded, without a trace of mockery on his face or in his voice. Why was it that interesting seemed like the nicest thing that any gentleman had ever said to her? Why was interesting on his lips so vastly preferable to beautiful or charming or amusing, all compliments that had already been paid her this Season?

His eyes caught hers and held them, and her heart began to race even more quickly, until she felt certain that he must be able to hear it, too, so loudly did it pound in her ears. Was this normal? Should she summon a physician? In everything she’d ever read about courting, there had been no mention of a moonlit scene on a balcony concluding with a swoon due to some sort of malady of the heart.

“I’m certain my mother would be appalled if she heard you say that,” Violet managed, forcing a laugh, still not breaking their gaze. “She’s always worried that I’m too interesting for my own good.”

He smiled again, just a flash before it vanished, and Violet once more had the curious sensation that everything around them dimmed in comparison to the brightness of that smile. Even after it was gone, its presence somehow lingered, making the sharp-angled intensity of his face less severe, more welcoming. It was as though once she’d seen that smile on his face, she could never forget the impression it had left.

“Well, I think you’re just interesting enough for my own good.” He took a step forward and extended his hand.

“Lady Violet,” he said, “would you do me the honor of this dance?”

Excerpted from To Have and to Hoax by Martha Waters. Copyright © 2020 by the author. Used by permission of the publisher. All rights reserved.