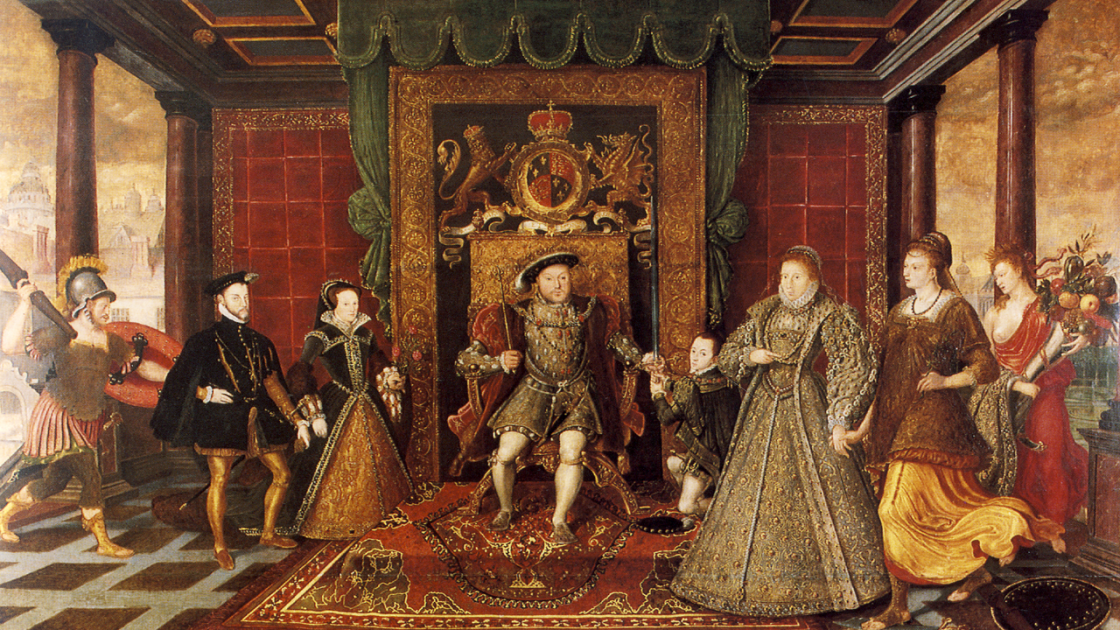 To the untrained eye, the Tudor line of succession seems quite simple. If the reigning king or queen dies, their first-born son (or daughter if a son can’t be found) becomes the new monarch, right? In reality, this issue was not so straightforward. When the infamous Henry VIII died in 1547, the nobles agreed universally that his only son, nine-year-old Prince Edward, renamed Edward VI, should ascend to the throne. BUT the fate of the Tudor line became murky when the young king’s poor health made it unlikely that he would produce an heir. In addition to that minor issue, Henry VIII also hand-picked sixteen noblemen, including ambitious figures like Edward Seymour and John Dudley, to rule England as Edward VI’s Privy Council until the young king would come of age.

Now, wouldn’t Edward VI’s half-sisters, Princess Mary and Princess Elizabeth, be next in line after him? In the 1550s, this question was highly contested, as both princesses had previously been declared illegitimate, and many nobles believed that this decision erased their claims to the crown. And if that was the case, who should inherit? In her new novel THE LAST TUDOR, #1 New York Times bestselling author Philippa Gregory explores this sixteenth-century quandary, shedding light on the prominent figures who were a mere breath away from the throne. Let’s take a look at these aspiring nobles and see who had a claim to (or tried to claim) the coveted throne of England.

THE TUDOR AND STUART HOUSES

Born in 1516, Princess Mary was the daughter of Henry VIII and his first wife, Katherine of Aragon. Disappointed that his marriage with Katherine had not led to a male heir, Henry VIII asked Pope Clement VII to annul his marriage. When the pope refused, Henry VIII parted ways with the Catholic Church, had his marriage to Katherine declared void, and married his mistress, Anne Boleyn. Due to this turn of fate, Princess Mary was declared illegitimate, and years later, this decision would impede her ability to come after her father’s successor, Edward VI.

Conceived by Anne Boleyn and Henry VIII before they were officially married, Princess Elizabeth entered a royal court riddled with controversy. When Anne also failed to produce a male heir, Henry VIII began courting his next wife, Jane Seymour. Accused of adultery, incest, and plotting to kill the king, Anne was beheaded in 1536 at the Tower of London. At this time, Princess Elizabeth was declared illegitimate just as Princess Mary had been. In 1537, Jane finally gave Henry VIII the son who would become Edward VI. Although the princesses watched their half-brother’s coronation from afar, Edward VI’s early death in 1553 gave them an unexpected second chance at the throne.

Although Henry VIII took center stage in the 1500s, he actually had three other siblings and was particularly close to his younger sister, Mary Tudor. In 1514, Mary became Queen of France through marriage to Louis XII. After his death, Mary married Charles Brandon, Duke of Suffolk, for love, and together, they had Frances Brandon. Due to her mother’s royal blood, Frances, a formidable woman, was in line for the throne after Henry VIII’s children, her first cousins. And if the illegitimacy of the young princesses took them out of the running, then Frances was arguably first in line for the throne after Edward VI. In 1533, Frances married Henry Grey, Duke of Suffolk, and together they had three daughters, Jane, Katherine, and Mary. Through their mother, the Grey sisters were part of the Tudor bloodline, cousins to Edward VI and the princesses, and also in line for the throne. The Greys were also good Protestants, which made them particularly desirable contenders.

Henry VIII also had another sister, Margaret Tudor, whose first husband was the king of Scotland, James IV. Their son, James V, became the next king of Scotland in 1513, and his only child, Mary, Queen of Scots, inherited his crown in 1542. As the granddaughter of Margaret Tudor, Mary is another member of the Tudor bloodline and cousins with Frances, the Grey sisters, and Henry VIII’s children. Clever and much-admired, Mary’s claim to the throne was on par with that of the Grey sisters.

After the death of James IV of Scotland, Margaret Tudor, Henry VIII’s sister, married Archibald Douglas, Earl of Angus, and had one child, Margaret Douglas. Margaret was Mary Queen of Scots’s half-aunt and cousins with Frances, the Grey sisters, and Henry VIII’s children. Margaret was rather bitter, as her claim to the throne was not as strong as that of her cousins because of the low rank and disputable character of her father. In 1544, Margaret married Matthew Stuart, Earl of Lennox, and had two sons, Charles Stuart and Henry Stuart, for whom she had high hopes.

Through Henry VIII’s will, John Dudley came to power as a member of Edward VI’s Privy Council, even though the Dudley family had fallen into disgrace when his father, Edmund Dudley, was executed for treason a few decades prior. An enormously power-hungry fellow, John became Lord President (the leader of the Privy Council) in 1550 and later Duke of Northumberland. Married to Jane Dudley, Countess of Warwick, John had eight children. The most important ones for our purposes are two of his youngest sons, Sir Robert Dudley and Guildford Dudley.

Brother of Henry VIII’s third wife and uncle of Edward VI, Edward Seymour’s illustrious family also gained more power through Henry VIII’s will. Initially, Edward was chosen by his fellow members of Edward VI’s Privy Council to be Lord Protector, which meant that he could rule England unchecked until the young king came of age. As I’m sure you’ve already guessed, Edward’s reign as Lord Protector was short-lived, as John Dudley replaced him as Lord President, a modified version of Lord Protector, in 1550. Two years later, Edward was executed for treason. Although Edward’s death temporarily disgraced his wife, Anne Seymour, Duchess of Somerset, and his children, Anne, Ned (Edward), and Janey, their charming dispositions would help them regain favor in court.

Now, you are an expert on the Tudor line of succession! Easy, right?! And if you’re still a bit confused, don’t fret! It will all come together once you start reading THE LAST TUDOR, coming August 8th, 2017.