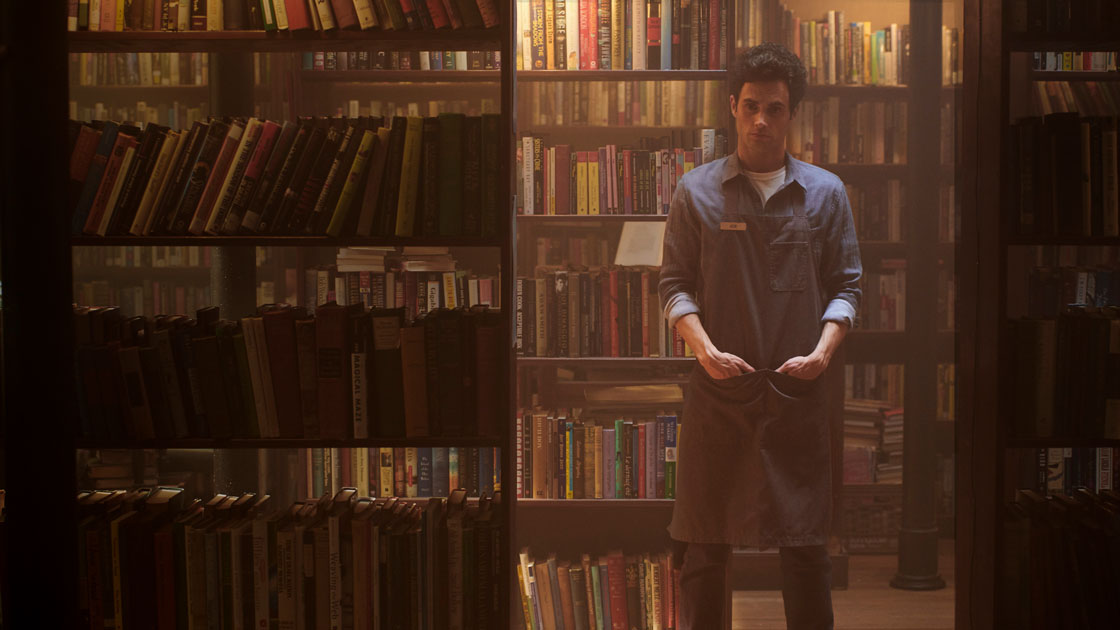 Netflix’s You has become the most recent binge-worthy show, thanks to the help of Penn Badgley and his portrayal of a psychopathic bookstore owner (who’s creepily similar to Dan Humphrey in Gossip Girl, but that’s beside the point). If you haven’t heard of the show yet, the plot revolves around Penn Badgley’s character, Joe Goldberg, and his obsession with the beautiful aspiring writer Guinevere Beck. Joe meets Beck when she comes into his bookstore one afternoon, and the two spark up a conversation. After Beck leaves, Joe stalks her daily activity via social media and decides to plan a chance run in at a bar in Brooklyn. Joe and Beck soon begin a romantic relationship, which involves Beck remaining seemingly oblivious to the bookstore owner’s various displays of red flags. Joe’s infatuation with Beck then transforms into obsession, and the show takes some surprising and murderous turns.

For those of you who have already watched all ten episodes of the first season (I watched them all in less than 24 hours…), you may be interested to know that there’s a book on which the show is based. The book—of the same name—features Joe, Beck, Peach, Ethan, and many of the other characters we grew attached to on the show. However, it’s important to note that there are also a lot of differences between the novel and the show. While revisiting the book that inspired it all, I cataloged the biggest differences I found between the two.

BONUS: Once you’ve read the book You, and found all these differences for yourself, follow it up with Hidden Bodies—the sequel by author Caroline Kepnes, and the basis for Season 2 of the show!

Difference 1: Paco does not exist in the book, like at all. Neither do Raj, Claudia, Ron, or Annika.

All these characters are strictly in the show. So all those sweet moments with Paco that make Joe slightly sympathetic to viewers? Yeah, they’re not in the book at all.

There’s no big battle between Peach and Joe in the book. In the show, Joe kills Peach while she’s out on her daily run (which is a VERY real fear of mine). He DOES stage it as a suicide though.

Difference 3: Candace is definitely dead in the book.

Unlike the end of Season 1 (when Candance randomly comes back after it was implied she was murdered), the book concludes with another woman, named Amy Adam, walking into Joe’s bookshop of horrors. This basically implies that the cycle of Joe’s murderous rampages will continue.

Difference 4: Beck never finds Joe at the Dickens Festival in the book.

He just creepily follows her there and lurks from afar without getting caught.

Difference 5: Joe is even grosser in the book.

Since the show originally aired on Lifetime, there were obviously some restrictions when it came to keeping the script semi-appropriate in terms of language and whatnot. However, since the book is entirely in Joe’s first-person, unfiltered narration, it dives deeper into his disturbing true nature.

Difference 6: Beck does not get a published book.

Unfortunately, Beck does not land any sort of book deal in the novel.

Difference 7: The Central Park scene where Beck calls Joe out for following her? That never happened.

Joe’s even more impressive at stalking in the book, which is super concerning.

Difference 8: Joe’s bookstore staff isn’t only Ethan in the book.

There’s also a staffer named Curtis…who Joe fires because he tells Beck Joe’s home address. Ethan actually only comes into the story as Curtis’s replacement AFTER Curtis gets fired.

They meet in the subway in the book, a true New York City love story (obviously kidding).

Readers get to meet Mr. Mooney when Joe decides to stop by his house to borrow a car (to use to follow Beck, obviously). There’re actually multiple present-day interactions between Mr. Mooney and Joe in the book.

Difference 11: Joe is VERY insecure about not having gone to college in the book.

Joe’s narration in the book brings up his lack of a college education at numerous points. It’s also a main issue that Peach brings up to irritate Joe. Whereas in the show, this is not vocalized at all.

So in the book, Peach generally cannot stand Joe, strictly because of his economic status and how he’s dating Beck. She’s not on his back about being a legit stalker, like she is on the show.

Difference 13: Joe (kind of) uses his sessions with Dr. Nicky to better himself.

He actually takes Dr. Nicky’s advice in the book and seems to enjoy his therapy sessions. Joe is a big advocate for the benefits that therapy can bring to people. He even gets into a disagreement with his girlfriend Karen about it when she says she thinks counseling is essentially useless. Whereas in the show, Joe doesn’t seem very affected or moved by therapy.

Difference 14: In the book, Joe’s story to Dr. Nicky about why he’s in therapy revolves around how he suffers from OCD.

In the show, Joe comes up with an elaborate story about how he’s having issues in his homosexual relationship with his significant other.

In the book, Beck’s other friends are actually very vocal about how they’re not very big fans of Peach. They don’t attend Peach’s party and don’t go out with her either. In the show, all of Beck’s friends hang out together and get along (most of the time).

Difference 16: In the book, Beck admits she knows that Joe followed her from the bar they officially “met” at in Brooklyn.

In the show, Beck has no clue that Joe was also at her poetry reading.