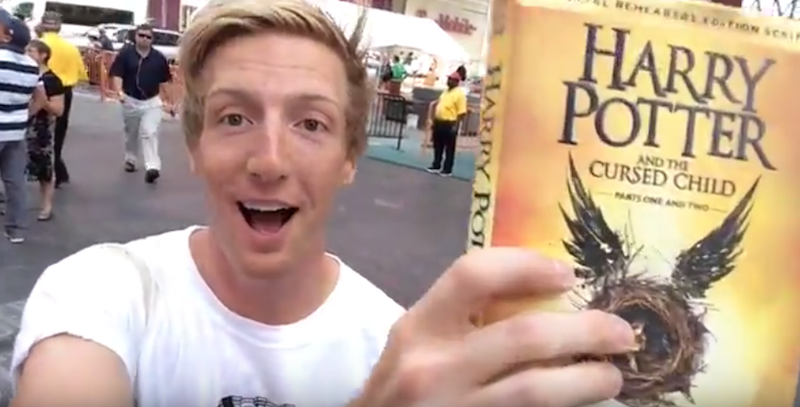 As a living breathing human, I was—of course—excited to read Harry Potter and the Cursed Child. But when I started seeing the tweets roll in on pub day, that excitement dissipated more quickly than it took me to correctly spell the word dissipate just now. Once I saw more than a few people throw around the phrase “bad fan fic,” I knew that a relationship between HPCC and I would never come to be. I do have a few friends that flew to London to see the show and loved it, but the reaction to the pages alone was not compelling.

Enter Alex Lauer, creator and star of my personal favorite YouTube series, #OneFanShow. If you are a musical fan, go check out his Tumblr and subscribe on YouTube because Alex’s videos are always on point—super creative, well-informed, and hilarious. If you’re not, GET THE HELL OUT OF MY FACE. Ahem. Anyway, Alex was one of the excited (then disillusioned) many who read The Cursed Child on day one. And when he found out that they were trying to bring it to Broadway, he was not pleased.

So he did what he does best—took to the streets.

“When I heard about the play, I was super excited about it, but after I read the script, I realized what this was,” he says. “It was not written by J.K. Rowling, so it should not be considered canonical. And it’s fueled by money, not respect for the characters and stories that we know and love. Any fan that has read this script knows that there are a lot of problems with it. The producers want to bring this show to Broadway now, but I for one, will not stand for it. Unfortunately none of the mainstream media have stood up to this money machine yet. But there’s one platform that we can always count on: The Quibbler.”

He literally started a petition on change.org, designed this custom edition of The Quibbler, and handed it out to commuters in the subway at rush hour. In 110-degree humidity.

And that’s why Alex Lauer is an American hero. Watch what happens.

I can’t even figure out what my favorite part of this is. Alex’s complete brazenness in shouting “the wizarding world’s alternative voice!” in a crowded subway station, the line “we’d rather have A Very Potter Musical with Darren Criss,” or no wait…yeah it’s this.

And with that, I echo Alex’s sentiments: “J.K. Rowling, I love you. Please don’t hate me.”